In conversations with Clinton 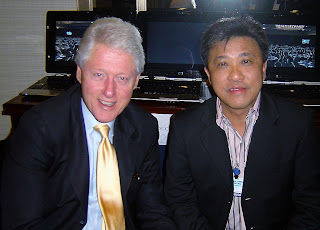 The blogger with President Clinton.
President Bill Clinton found time to share his thoughts on various issues despite a hectic day on Friday evening. The 42nd US president is still addressed as Mr President, as with all former chiefs in America. He invited this blogger to his suite at the Hotel Sheraton, where the Clinton Global Initiatives meeting was held, at around 9.30pm for a chat. Asia, particularly China, has caught his attention. The Olympics opening in Beijing floored him, he admitted, and the speed which China has moved would have a major impact. The CGI will for the first time meet outside the US in December and Hong Kong has been chosen for the meeting. But that's not all - he has received a personal invitation to visit Kuala Lumpur after the HK trip and he hope to make his first visit to Malaysia. "I would have to ask Hillary about this as she would want to say which countries should we go. I don't know if she is even available with the crisis."
I recommended Pulau Redang to Clinton and his aides, saying they should see the extraordinary marine life there.
In a chatty mood, he talked about a wide range of issues from his 89-year-old mother-in-law to the US financial crisis to celebrities. Oh yes, I also got the chance to meet up with the Rev Jesse Jackson. Details of interview to come.
Posted by The Writer at 9:33 AM

Chun Wai, I propose that you recommend an alternative meeting venue:
a) Kamunting. We want to highlight the ISA issue when there are more international press and dignitaries present.
b) Sabah. Where we can see the rights of the Sabahans being usurped. Where Sabahans become foreigners, and foreigners become Malaysian citizens thanks to the hankydoray by the NRD.
c) Sarawak. Where we see the local orang asli lose their land en masse to timber companiesand developers thanks to greedy business men acting to cahoots with the state government.

you are the men dato!its great to c u with clinton...hope to read everything clinton told you in ur colum or in sunday star...cheers.

Poor Clinton lost his job over a little fun with Monica. Over here in Boleh Land, the big wigs commit serious crime, but still get to retain their jobs and even get promoted, whereas innocent people get thrown into prison. And btw, Dato Wong, be careful what you write in your blog or column. The gomen here are hyper sensitive against criticism these days, and will not hesitate to throw you in the lockup, and then all those heroic commentors in your blog who will egg you on may not come out to support you in times of need, as RPK is finding out...cannot get 100,000 signatures for petition because all the heroes dare not put their names in print in the petition.

"Fast food is convenient. This US$700 billion package must ease the concerns and build up confidence. But if you only take this, it doesn't agree with your stomach. You should think about Chinese slow cooking and slow food,'' he said.

American way of lending money are absurd...0% deposit for a mortagage? Thats call freedom without responsibility

Clinton is a great president! I wish our ministers here are in that caliber. Ours are worse than Bush Junior.

The President of a great nation is called Mr President. Here our big wigs are adorned with many many titles, sometimes with purchased honorary doctorate, and sometimes bought not so honorary doctorates,(all to inflate their big egos), before we even can say their names. But the performance of these many ministers are pathetic.

Chun Wai, please ask Clinton to visit RPK in Kamunting. We want to embarass Syed Hamid. And of course UMNO youth will say stupid things to ask USA to go fly kite. But don't worry about WWIII, because the UMNO youth is all NATO.

Dato, please send some "FREE RPK" T-Shirts to the Clintons, and ask them to wear the T Shirts in Malaysia .

we Malaysian will like to welcome Mr President Bill Clinton and his family to visit Malaysia for Holidays.
Dato Wong thanks for your effort to promote Malaysia.
Regarding the Malaysia politics, it is up to the Malaysia Government to explain to the world. I think the world leaders know what is happening in Malaysia. Hope for a better future for all Malaysian regardless of race.

I'm pretty sure deep inside you must be feeling very bitter like anyone of us experiencing all the mockery in our government administration. And being a journalist it would not be difficult for you to choose an appropriate topic for Clinton to speak in Malaysia. That could be a lesson of sort for our below average leaders.

Clinton may have his weakness but no one doubted his skills and intelligence as leader and CEO so make him as the key speaker lecturing our fellows. Let the Star be the main organiser/sponsor.

Pls ask Bill to meet shave his head bald. I am sure a lot of RPK supporters will be waiting to cheer on him upon arrival at KLIA. Did you share the latest ISA arrests with him?? It'll be nice to hear what Bill has to say.

U tell Clinton if he comes, don't talk or raise sensitive issues because we have got a bunch of terrorists waiting to throw molotov cocktails at his entourage.

Great President! Too bad a lot of his work has been undone by George Bush Junior.
In USA, the respective party's aspiring candidates must first prove their worth by debating each other within the party,and then finally the opposing parties' candidates must debate each other for the prsidency. They must prove they are good. Here in Boleh Land, UMNO does not practice democracy within the party. Cannot speak up. Cannot criticize leaders. Cannot vote. Then they carry the same philosophy at the national level. Citizens cannot criticize govt or else they get thrown into prison under ISA or Seditons Act, or else they get their youth mob to attack your homes. Such is the decadence of this Boleh Land govt. Due to the lack of democracy, we have many idiots, racists and fascists in the govt today. It will take some major effort and large discontinuous force to unseat this authoritarian govt. Business as usual will not rid us of this corrupt govt. The rakyat of all races, religions, and geographies must UNITE to usher in a democratic era.

Bro Wong, I hope you will update "Mr. President" that the American idol here has yet failed to live to his expectation. First the 16 September deadline, second the new 21 September deadline, and third the infinite deadline. And please also tell our American friends to lay their hands off our internal affairs. We did not say a word when they started rounding people and sent to the Gunatanamo Bay, and we shut our mouth traps at the height of the Monica lewisnky's trail. Therefore, we do not see the need for them to comment our ISA, let alone intefering with Anwar's trial.

Chun Wai, good to see you with former Pres. Clinton. He has his faults, but Clinton's was not a failed presidency.

Yes, invite him here, BUT nobody should politicise his private visit. He is a private citizen now. Let him enjoy our sights and cultures.

Wong, I hope you don't mind me saying a few non-thread issues but I merely want to address a few comments by visitors to your blog (in this post) that I thought require ... ;-) ... addressing.

Firstly, B Clinton did not lose his job over Monica - he was certainly hauled over the coals but the attempt by Republicans to impeach him, with the 'inquiition' too enthusiastically led by an ambitious Kenneth Starr, the investigative counsel, failed. Clinton was cleared of all charges and continued until the end of his 2nd term.

It was a time when the American people were asked whether they wanted their President to be a Pope as well or just a competent leader?

Second point - while I support the immediate release of RPK or for that matter, anyone, from detention under the Draconian ISA, let's not kid ourselves he was egged on by his readers into his at-times highly libellous articles. RPK is not a man that is easily persuaded. What he did, he did knowingly and not because he was instigated into writing those inflammable articles. In my opinion, he did it all for Anwar. So I would like to see Anwar now fight for RPK, at least on the basis of hutang budi, assuming of course Anwar still has any use for the poor bloke locked up in Kamunting.

Ktemoc, it is unlikely Anwar can get RPK out of prison because it looks like Anwar will probably end up in prison too, as some people in UMNO are out for his blood to prevent him from heading a new govt. If sodomy II fails, they will get him with something else, like Sedition Act,ISA,OSA or Race Relations Act, or whatever it takes. This is Boleh Land, apa pun boleh lah.

BLUEMOON: So far u I have seen too much of your inconsistency. U said Pak Lah brought the rot to M'sia and u don't know if Najib is a good candidate. Now u r saying that Anwar is calling bluff.

So who is the best candidate?? Why don't u offer yourself if u think u r that great!!!! In short, you are no different from FLIP FLOP!!