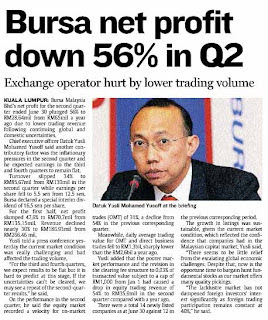 Click on visual above to track Bursa stock price

We all know there would be bad news coming up but the latest figures are much worse than anticipated. The stock index may not be an indicator of the economy but certainy it has serious impact. Bursa Malaysia Bhd has reported that its second quarter net profit fell 56% due to the weak stock market and warned that it would be almost impossible to meet some of its targets for the full year. The figures was its worst quarterly showing since 2005. The reasons - slowing US and global economy, rising crude oil, commodities and food prices. But unlike other countries, we have another problem - domestic uncertainties.
The Malaysian Institute of Economic Research (Mier) reported that consumer sentiment sunk to an all-time low cost concerns, saying the economy was slowing down considerably. Mier has revised downwards its gross domestic product growth forecast for this year from 5.4% to 4.6% which is below the government's target of 5% to 6%.
But this is what executive director Prof Datuk Dr Mohd Ariff Abdul Kareem has to said - the Malaysian situation has been further compounded by predicament created by local politicians.
"This is affecting short term investors who would be deterred by the political situation now. Politicians need to be aware that what they do could cause a knee-jerk reaction and give investors wrong signals."
For the past one month, businessmen travelling to major cities have been asked by investors and fund managers one question - is it safe to put money in Malaysia? They hear and read stories that are disturbing to them and they questioned, rightly too, why they should not be looking elsewhere. They hear of street protests, government conspiracies, murders, sodomy, police cover-ups, statutory declarations and a possibe change of govt by Sept 16. It's all very confusing to them - to us too for that matter - and they have two options. KIV the investment or just go elsewhere. The real impact of the global slowdown has yet to be felt by most Malaysians. Yes, the ringgit has shrunk, daily expenses such as food and petrol, have shot up but generally most Malaysians have not fully understood what's coming. There has been a slight drop in the price of crude oil but unless it hovers around US$100 per barrel, which is not imminent, the situation would not improve. The govt seems to be looking for various sectors to increase revenue. The independent power producers have been slapped with windfall taxes, that could generate RM2bil a year for the govt, and now research analysts think that gaming tax may be raised, the NST reported. The question is are the politicians merely leaving this to the Finance Ministry, the bankers and experts while they indulge in their daily political accusations and counter accusations? Please, read the business section of the newspapers.
Posted by The Writer at 1:59 PM

Let us not always blame the politicians. As long as we have the current system, polticians (like assholes) are here to stay.

One of the major problems is linked to our weak and probably corrupt government institutions - police, judiciary, universities and key agencies like immigration.

For far too long, we have allowed mediocrity, sometimes stupidity to creep in. We have not ensured that the best are appointed to head these important institutions.

Going by the current comments from parliamentarians and other politicians, this is expected to continue. Seems like mediocre ones are heading lots of institutions.

What's happening now is the result of decades of patronage politics, overzealous implementation of affirmative action policies and complete disregard for the serious brain drain that had taken place, taking place and will take place.

Let's get real and call a spade a spade.

Any idiot can tell you that!! The government has failed.. failed miserably. It has been 4 months since the last election, our 1st quarter and what have BN government gotta to show? NOTHING!! Nothing also not so bad.. Nothing and tearing down everything down FAST! Public confidence, good governance, economy, whatever little integrity left... everything is going to the DOGS!

I am not saying that the Opposition Party has not played their part in this going to the dogs act but for the love of GOD!! BN being the ruling party for the last 50 years, should know how not to let the opposition lure them into the pits! BN should have the necessary experience to handle and run a country efficiently or am I wrong here. BN cannot lead.. cannot cannot come to terms that they are no more Lords and therefore, will be questioned and grilled when they make a move??

Carry on like this.. it is a sure recipe for BN to lose even their pants off by the next election!

I implore all politicians to work together for the sake of the nation. Don't climb the highest ladder thinking there is a pot of gold only to find there is nothing there left but only crumbs! This "show" although it's intriguing must end with victory for the Rakyat and for the brighter Malaysia. Or else everyone loses! Let us be proud once more to be called Malaysians and strengthen our resolve to work together. Don't let Shringgit shrink anymore!

Seriously .. is scarly but what is the main stream media doing about it ?

I hope they can sleep well in the night especially with one sided reporting.

Although the political unrest is disturbing, but Malaysian has long time been let down by lacking of Competency, Accountability & Transparency.

The comments by both the Anonymous contributors say it all. A spade is a spade and what lousy spades we have administering the country.

i asked again: Should economic considerations take precedence over the fight for justice?

Can someone give an opinion on this?

Dato Wong,
Don't tell us. Tell the cabinet ministers. We already know. But they either don't know, or know but don't care. They are more focused on retaining power. And they are more focussed on squashing anybody within the party UMNO, or without, from Pakatan or from any bloggers or witnesses.
ABU

Lets get the economy moving again! We are losing very valuable time.

But why not make the call to get it over with quick by getting BeeEnd to stand down!

All in all, Malaysian are aware and concern about the impact of the political going ons on the current economic situations. It is just BN and its leaders who are ignore the cues. They had been given a slim chance to prove their worth and they are wasting it away.

If PM is not going to put a stop to all these in a just and transparent manner, the situation will remain the same like his failure in the last 5 years. I'm seriously losing all my confidence of his 'smile'. I don't envy him his responsibilities but that's what he wants so he better buck up.

The plunging of the stock market is due to the weak and the instability of the political situation in the country.The crisis of Anwar,Najib and Pak Lah has scared investors and any time this yo-yo government is ticking like the fate of the Titanic.

Dictatorships only fall during a broken economy. Maybe God will use this upcoming recession to help us get rid of the current corrupt, inefficient and cruel government.
Que Sera Sera.

If the mainstream media, esp. NST and Utusan Msia have played its role as the cjheck and balance of Govt, we wont be in this shit today. Why is the media too bias and one-sided? Our politicians would not be too arrogant and corrupt if the media is telling it as it is.

For UMNO, the way to stimulate the economy is by building bigger, more expensive white elephants. No use to talk to them, always micro economy and not macro. Micro => which of my supporters are getting handouts.