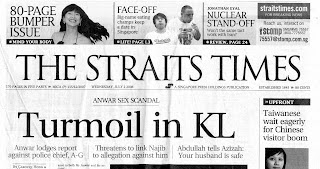 The Straits Times' issue on July 2 had a screaming headline "Turmoil in KL" - the kind of story that was enough to scare powerful investors who are parked in Singapore. It's the kind of story that will see Malaysia lose more investments. For us in Malaysia, it's another day in Malaysian politics, as much as businessmen detest it. Still, this is the kind of stories that's hitting the headlines all over. We blame no one except ourselves. The Business Times, in the NST today, carried a story quoting the CLSA Asia-Pacific Markets as saying that it has cut its year end target for the KLSE by 15% to 980 points, believed to be the lowest estimate in the market. The foreign research house also downgraded its rating on the Malaysian market to "underweight" from "neutral" citing political uncertainties, inflationary pressures and an economic slowdown. It said "investors have always viewed Malaysia as a politically stable country and a defensive market. However, the current political bickering potrays a negative perception to foreigners that will cause further de-rating," it said. We need to get our act together. Quickly too.
Posted by The Writer at 7:02 PM

The world is sieged with spiralling oil price and face global recession that mirrors the great depression of the 1930s.
But our politicians temerity and mudslinging exercise have driven the ivestors scurrying for cover. Its time for both the ruling and opposition parties to take stock of reality and reform! Otherwise, our ringgit would be further eroded (just cant stomach it - to buy 1 Sing we have to fork-out RM2.43 today! Where are we heading?) - GD

The world is confronted with possible global recession and our politicians temerity and mudslinging had driven the investors scurrying for cover.
Cant accept the fact that it costs RM2.43 to buy 1 Sing dollar today!
We are heading for trouble!

Yes and that means letting Pakatan Rakyat take over the Govt peacefully and quickly so that the business of government can be done by professionals!

Even my Chinese Accupunture Doctor from China comments that the only people who can destroy this beautiful country is we Malaysian's ourselves.

Even in your blog, your writing style, the flow and language used...seems to be only 'politically correct' tone and manner.

I would expect and love to read in your blog a more constructive, critical and genuine articles coming from the inner you instead of using the Star style of work.

Dear Dato Wong, As you are the chief honcho in the STAR, your blog will of course be watched with interest. Whether you will have a successful blog or not depends on whether this will be a blog reflecting your own views independent of STAR, or whether it will be a mirror image of STAR which is controlled by MCA. We have given up on STAR and other MSM for a fair coverage of news.For example, STAR has conveniently left out comments made by PI Bala's nephew Kumaresan about Bala's first SD.
What we want to see in your blog is your independent view, or is that not possible since you know your STAR bosses are also reading your blog?

What about the rumours of a big multi-national closing down and relocating to Vietnam in Penang, causing thousands to lose their jobs soon. This economy crisis will continue for a long time considering the morons now running our country. Who would want to invest here? It's BAD NEWS for all business people, have been so for the past one year.M

Good to know we are blogging away from the current mudslingings among our politicians. Well, like I said there are bigger stuffs to worry about than Anwar...

Anwar is making it hard for PM to concentrate what the people need. The politicking is over and let's get down to business of helping our country back on it's track. We do not have to worry about fuel price if the rest of the economy is not working ...

Honey moon is over and let's stay focus and cut off the mega projects.

Few thoughts, #1 - the power players responsible for the bickering cannot be unaware of the consequences of their actions. So what does that mean, did they intend for this to happen, to creat such instability so when they wrestle the power over they can miraculously turn things around and be the saviour, or do they just not care? as long as they achieve what they set out to?

Sometimes we cannot just based on business return sir!

We have been making our decision based on business return for past 40 years, and our country does not benefit in moral and ethical value.

it is time to bite the bullet and go for change.

After seeing all the political mess and recent technical glitch,
I have given up on Bursa Malaysia and swicth my equity exposure to Hong Kong intead.

After reading most of the foreign analyst report the target for KLCI is around 980.

Just look at Thailand. The political uncertainty really hurt their equity market when Thai Stock market been hovering around 780 for so long even tough the P/E is only 8.