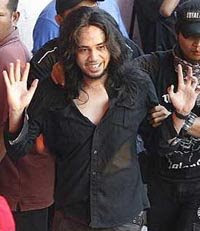 Now everyone knows about Carburettor Dung thanks to the antics of its lead singer.

The holier than thou PAS members are angry and pissed off with the antics of the Carburettor Dung lead singer, who pulled down his trousers to show his boxer shorts during a concert at the anti-fuel rally on Sunday. His antics saw the audience hurling abuses and throwing bottles at him. Poor chap almost got beaten up if he wasn't taken out of the stadium. The Pahang PAS Youth chief Suhaimi Md Saad is also furious that the protest turned into a "fun fair" and that its members were tricked into attending the gathering. Suhaimi is demanding the entire committee of PROTES to resign and take responsibility. The "jilat, jilat, jilat" song must have sent the PAS members into a frenzy. But Elizabeth Wong of PKR has rightly questioned what the fuss is all about. Guess folksy ala Woodstock style protest doesn't work for PAS members.
Posted by The Writer at 10:20 PM

frankly, mr. wong... why are u such a hypocrite? would you tolerate such behaviour in a church environment? why one standard for you and quite another for PAS?

No one seems to be happy in this country.

Rakyat was upset with the current administrative style. They used their votes to demonstrate that. They were and are still not happy.

PAS members are upset with PROTES (I thought they were from the same camp protesting the fuel price hike?!?). They criticized the event. Perhaps, it was Umno which planted the 'back-side act'. They are not happy.

Foreign investors are abandoning our stock exchange for now. The drop in KLCI has been dramatic. They are not happy.

Who is happy now??

Rakyat wanted balance of power and better check & balance. With balance of power, more substantive matters are supposed to be discussed and implemented, as politicians strive to champion Rakyat's causes.

What have we got now is the reverse! Less Rakyat's interests are being taken care of now. More forms (as opposed to substance) have become the important focus.

How can we be happy?
Where do we go from here?

what??? you're concern about the Protes rally??? what is this joke ??

you've slender PAS on your comment without giving any evidence... those people might be from PKR as well as they felt insulted by the action of the singer... where is your fact??? you don't fit to be an editor of a newspaper but fit enough to be one of the ass licking BN owned newspaper...

manage a fun fair is more difficult than a country, believe me

Ooops! Another conspiracy. They forgot to explain that even though they were the ones who engaged the bands, other parties managed to plant this band's actions into their show. they are never at fault, always other people's fault.

Wong, I thought you said you will not focus on the butt stuff anymore. If so, why are you discussing butt stories again? Let's focus on the more serious isssues then. What the hell is Pak Lah going to do to avoid another upcoming crisis, which is to avoid the abandonment of housing/ construction projects due to highly escalated material cost? When is the BN govt going to remove the APs for motor vehicles? Why are we still subsidizing the BN cronies and using our money to create AP kings/queens? Can you give press space to query WHY Pak Lah and Mohd Nor is starving PENANG, your own home state? I thought you were passionate about your own Penang? Who does Petronas sell oil to? At what price? WHo are these middlemen that Petronas sell oil to? There are no shortage of hot topics. But you want to talk about butts when it is about PR, but want to stop talking butts when it is the BN ministers's butts.
PENANG BOY

The STAR, as well as your BLOG, is just as guilty about giving prominent coverage to trivial issues or events. Like this moon shining (not quite- he still had his pants on), or statements from a nobody like Ezam getting front page, etc. STAR should give serious coverage to the corruption cases still unresolved, the economic sanctions and blackmail of the PR state governments by the federal government, the subsidy by the people of the umno cronies, the monopolies set up by the federal government (who are the people in these monopolies and what scale of money are being sucked by these monopolies from the rakyat?). STAR, together with the other MSM have been printing a lot of trivias instead of highlighting and focussing on these abuses, and are thus accessories to crime committed by the government.

I am definitely an open minded Muslim. I have been following all the reports in blogs, online news on DAP, PKR and PAS.

To date, I would prefer to align myself with the PAS group because they appear to have principles and are more consistent in what they do.

I think if it is bad, let us not condone such behaviour and be honest with ourselves. It does not make one a hero just for the sake of showing that you are not supporting the views of PAS with regards to this issue.

We would be in big trouble if we have PR ruling the country because it appears the pakatan is made up of a group of egoist trying to outsmart their component party members.

PR must grow up and be responsible adults before they can rule the country. Now they are as flip-flop as the current Government.

At the moment, the situation for us Malaysian are: "ditelan mati emak, diluah mati bapa"
Both BN & PR just equally rubbish!!

It's rather rude to show your butt at people. Isn't it so un-Asian?

And it was stupid of the organisers for bringing a noisy, lousy band to a family-like carnival in the first place. Whoever thought of bringing in these 'dung' guys must have had his/her head screwed the wrong way.

Just wondering....and you wouldn't be offended if the same happens in one of your church event? That it would be perfectly fine if a performer invited to a family affair decides to display rude gestures?

Btw, I'm a Christian too and I believe for someone who professes to be God-Fearing, should not display such high level of hypocrisy, especially when one's opinions are widely read by all levels of society.

1. The gig was inappropriate for the type of crowd.

2. Organisors should have more brains to pick suitable acts.

The PAS participants at the rally certainly felt like fish out of water! But if you don't bring in entertainment like Dung Carbureter, how many people will turn up? It is one thing to talk about protest, another thing to make the atmosphere carnival to get the people to participate. After all it was a Sunday and many families came along too. If the PAS participants insist on all things Islamic including strict separation of sexes in a public gathering, I think only their people will turn up, and not the PKRM and other components of PR as well as NGOs. It is high time for PAS to stage their own public gatherings whether these be protests or otherwise.

Ya...Wong Chun Wai..here we go again...Pas Butting...we have to respect non-muslim wishes and practices, which we do...bend over backwards sometimes like on CNY (the firecracker hysteria)but non-muslims like you, the bigoted ones disrespect muslim sentiments...why don't you go walk around with your fly open...you still wear your boxers underneath kan...

you are a false prophet. the bible is right to say many anti-christs will come out from among you.

it saddens me that one whom consistently quotes the bible and claims to be a christian is nothing but a hypocrite... a paid scribe.

let me quote you this, "those who love the things of the world does not have the love of the father in him."

I can take bare butts without being offended, whatmore with boxer shorts, however, we have to respect the other spectators.
Not only the muslims but the non muslims were also offended.
So this is not about PAS being an extremist. It's different when you buy a ticket to watch a concert where you are willing to accept the "exposure" and another when it's a rally for all. So we should consider all parties' sensitivities.

on the issue of bickering, they'll never stop, will they? PAS will ALWAYS be unhappy one way or another with whatever their colleagues in the PR do. in fact, until now, the trio still have not a power structure do they? I anticipate alot more to come, the internal fighting that is.