KL comes to a standstill 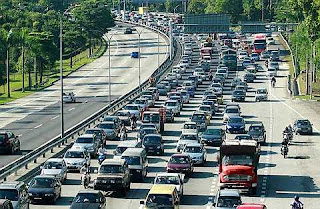 Traffic at a crawl at the Federal Highway this morning. - Starpix

Updates: 5.20pm - It's an anti-climax after all. The no faith motion was rejected, there was no demo and Anwar refused to show up at the police station. Habis cerita.

KL has come to a standstill. The traffic and politics literally. The police have set up roadblocks at major roads leading to Parliament causing a massive traffic jam in the city. The spillover effects of the gridlock can be felt as far as Shah Alam and Petaling Jaya. Traffic is almost at a standstill as the cops prepare for the demonstration by supporters of Anwar Ibrahim. Anwar is expected to turn up at the KL police headquarters at 2pm to have his statement recorded over the sodomy allegations. But conflicting reports have surfaced over the last one hour. Negotiations are said to be taking place between lawyers of Anwar and the police now. But now, PKR officials are saying Anwar will not turn up. At Parliament, the Pakatan Rakyat MPs are tabling a motion of no confidence against the Prime Minister.
Posted by The Writer at 11:12 AM

It is police that is paranoid. They said that demonstration will be held at 1000, although nothing seemed to be in the works . The blogs would have captured it but nothing. And now, they change the story to still blame it on anwar? Or are you just trying to link both things now?

Police have to bear the economic lost of their action. They have caused jams to start even over the weekend. Does police want the rakyat to get down from the cars and demonstrate? Then declare state of emergency with the army? What kind of tactic is this? Rubbish. If the KLCI goes down again today, you know who else contributed to it. The financial centre is paralysed.

Perhaps, it was written in English or perhaps House Speaker(s) has/have a "FILE" if you know what I mean!!??

Just let the motion be tabled and voted on so that we the people can move on to more important things like the economy and our very livelihood. I've a family to feed and am not rich unlike certain politicians.

Am a lifetime member of GERAKAN(Gerak & Makan) & DAP (Duduk Atas Pagar). At the end of the Day, we should support the government of the day be it State or Federal.

Otherwise, our RM will be known as RUPIAH MALAYSIA instead of RINGGIT.

When any Malaysian citizen is asked to report to the police we comply. Why when AI is asked to do so there is a negotiation? Whatever he fear or imagine might happen should not be an excuse for what is going on! Otherwise all Malaysian should also be allowed to negotiate cos we do not believe we will be treated fairly!

WCW
Isn't this the work of your political masters?? You must be very proud of it, making hundreds of thousands stuck in jams and burning up valuable petrol.
If you have any bit of decency left, you should leave the Star as staying will only reinforce your position of being on the side of the leeches and rapists of the rakyat. Go to hell...

Malaysians in dilemma? So many events and news both real and unreal. Don’t know who to believe? Bombarded with too much spins. These are the quotes, we now hear.

“Give up”, “Fed up”, “Wait and See”, “Lost interest”, “Headache”, “Cannot believe anyone”, “Who to believe ah?”, “Niamah”, “Pening kepala”, “Pening otak”, “Sudah lah”, “Pi mampus”, “Insyallah (God Willing)” or raise your palm and fist and put them together on National tv or www.Youtube.com or www.malaysiakini.com or www.Malaysia-today.net or other blogs.

Why? Because it depends on what you want to perceive and your bias toward your own race, color, religion, party, groups, interests, superiority or plain dumbness.

Think hard and search your conscience from deep within and “Viola” you can differenciate between Night from Day. Throw out bias towards race, creed, superiority, affiliations, religion and beliefs, greed, power, cronyism etc and then see whether some of the things happening around is right or wrong , true or false, evil or good, facts or fiction.

The goverment is scared of one man that the whole of KL/PJ have to suffer.

Seriously its about time PDRM grows up.
The hardships faced by millions of people on the road, will be converted into "votes" for the alternative again in the Next GE.
BN is destroying itself.

MALAYSIA BOLEH!
Only in Malaysia, where....
* Sodomy is a bigger crime than murder.
* Where the police come armed with assault rifles to fend off unarmed demonstrators (as if batons and pepper-laced water cannons are not enough? ).
* Where ministers who get shamed do not resign in shame. What has happened to all that "Look East" thing? Shouldn't our shamed ministers commit hara-kiri as Tun has reminded Malaysians recently.
* Where the economy is plunging down out of control, and no ministers talk about how to get Malaysia out of the hole, but instead still talk about who is succeeding who and when?

One man is over-acting and the whole police force is over-reacting.
Why should the whole city be paraylsed because of this?
Here's a message to diehard the supporters of Anwar: Tell your brother to co-operate with the police lah.
Open your eyes, your ears and your closed minds. This man is a politician, not a malaikat.
While he was in power, bukan main eksyen. Sombong giler, especially in front of the media.
He too had his cronies, all of whom made so much money thru him. Go check the records of people who got licences from the Finance Ministry then.
Anyway, if you are innocent of the charges, face it like a man. Assurances of his safety already given by the government.
Instead of going, he set conditions and after that, he files a case in Syariah court. If you sodomise, will you allow four witnesses to watch kah?
Swear lah, junjung Quran. Itu baru berani. Ini nak consult religious experts lah,etc2 Helah confirm, tipu belum tahu lagi.
No need to have ridiculous twists and turns like a badly made Bollywood movie.
As for the police, what they are doing is disgraceful. Why make life susah for the ordinary people. Go and question Anwar at his house lah. If you can do it for Rosmah, why not Anwar.
Or if Anwar is challenging the law, tangkap him lah. Takut kah?
We have had enough of this long-drawn out drama. Cukup lah, sudah rasa muak.

i guess this is the new tactic by our BN.

Whenever there is any form of actions which are deemed detrimental to them, they will create conditions that will inconvenience the public.

In due time, the public will begin to get frustrated with all these inconveniences and eventually will stop supporting anything that are deemed to oppose the government since they know that such measures can only caused so much hardship for them.

It's a psychological counter measure now being used by our BN and is working. People are beginning to question the opposition's moves.

Dear All,
It is the demonstration of how the criminal justice system works in this country. The 1998 when Anwar was arrested, the Evidence Act and the precedents was modified to suit the criminal trial under the ruling of Mahathir. Today we have a lesson to see how the police handle and investigate the suspect (or witness) so called "DSAI" under Criminal Procedure Code. The police should apply the Code without fear but ensure that Criminal Justice is upheld. We want to see a fair investigation not demonstration.

When "DSAI" called Najid as "Najib Mongolia" this is a demonstration and a serious hearsay, why when there is a claim that DSAI was involving in the sodomy the entire opposition want to move a motion to remove PM?

You see, this is a dirty political game. Why DSAI was recognized as the victim of conspiracy and Najib was recognized as the murderer? And the entire nation show the support to DSAI because of he was alleged to commit a crime? or just to express the anger over the petrol price hike? Please differentiate the difference between support DSAI and Anger.... Believe me, DSAI to become a Prime Minister will not bring down the petrol price but will burn out the only income of the nation.

Look at the current market price of Petroleum, what important is to make sure that the economic of the country become stable. How can you believe the petrol price will be brought down when DSAI become PM?

No doubt we are the country to export petroleum; according to DSAI, he will ignore the actual price of the petrol; what the price Dato Seri? RM1.30? RM1.50? can you also bring down the price of the rice? because we also produce padi. How about the price of the egg and meat? Dont tell me Malaysia chicken cannot produce egg or meat!

Apala? this is cerita donggeng to cheat the supporters and people in the nation. You ask Samy, can the steel price come down by start our own quarry? Then we better convert to communist.

Am I right? Please ignore all the news regarding DSAI, Najib or Politic. Let do business and everybody is happy.

I am now currently ont in Malaysia but i could feel how the Malaysian feel. The Rakyat are suffering from the inflation and economy already but the politicians are still enjoying blamming on each other, plan for succesion plan and all. Are you this politicians voted to do this type of things???I guess everyone want to see the guy that they vote for repay the faith with responsible and results or changes that could bring improvement. Most of the people don't really care now the MPs are from BN or PR now coz the GE had gone. Just prove your ability and make the beloved country a better place to stay with good position in economy as well as all aspect. Wake up and stop being a childish...Rakyat sudah susah, ahli politik main-main pula.

The sentiment & confident level of our economy hit all time low & yet our Go Home Minister declared Police State in KL this morning. Precious time & petrol were burned away.

Everyday we hear robberies, break-ins & all sort of crimes. Instead of improving our country security, our Go Home Minister setup roadblock every week to give us more misery.

This is how sorry our country is.