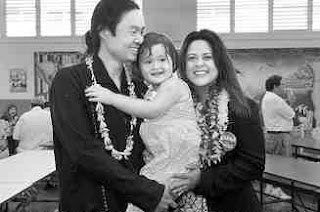 Here's a little snippet about Barack Obama and his Malaysian link. His brother in law, Konrad Ng, 34, is a Canadian born Chinese. His wife is Maya Soetoro - the step sister of Obama, whose father is an Indonesian. Maya, a Buddhist, is now a teacher in Hawaii, with Ng, who is an assistant professor at the University of Hawaii. Here's the Malaysian link - Konrad's father, Howard, migrated to Burlington, Ontario, from Malaysia. He is now a retired scientist who lives with his wife, Joan, in the little Canadian town. When Konrad and Maya got married, the usual wedding dinner was thrown at a Chinese restaurant where Obama, then a Senator, attended with his wife. Both Konrad and Maya campaigned for Obama during the campaign trail for the Asian votes. The couple has been telling voters that Obama, with his family links, has been the most multi-racial American presidential candidate.
Posted by The Writer at 12:03 AM

finally a decent post. was getting bored of responding to your inane, bigoted posts on PAS, Islam + tonee ppppuuuaaaaahhhh

Looks like America will be anointing it's first black American President in November. The white supremacists will not like this one bit and they can act in very crazy ways. Just hope everything will be smooth sailing for Obama.

Can someone ask Konrad's father (An ex-Malaysian) to invite Mr. Barack Obama to come and do a seminar in Malaysia on how to govern properly in this multiracial society here, regardless of race or religion?

Hey datuk...why don't you raise the PAS and Obama connection?

After all, his name is Barack HUssien Obama kan?

We all know how you like to perpetuate Islamophobia these days.

So what's your point? Whats the big deal if you can trace a convoluted link of Obama to Malaysia? Are you suggesting that Obama will have some sympathies to Malaysia?

Your STAR newspaper writes a weekly column glorifying Malaysians overseas.You miss the point that all these people have forsaked Malaysia for good and are today citizens of other countries, making fortunes there and not contributing one penny to the development of Malaysia. Many of them are even running down Malaysia from wherever they are.

Stop having fantasies about Obama and Malaysians overseas! Malaysia is the last place on their mind.

Thanks for sharing that slice of info about a man who has captured the imagination of millions around the world.

Obama has been able to sell his "Change we can believe in slogan" to Americans, especially the young.

The supreme white racists, er, I mean the white supremacists, will try to everything they can to knock him off before the election in November but it looks like it is Obama's destiny to be the US first black president.

In the US, the son of a white woman and a black immigrant Kenya can becoming the president of the US.

Disini apa macam? Malaysia Boleh kah? I'm sure the apanama, Malay supreme racists, including the one who is half-Indian, cannot imagine this, kan?

By the way, why do people get their knickers twisted over every little thing?

Everything is changing, so change to thongs lah.

I am shocked if you think Obama is the most "multiracial" candidate among the US Presidential Candidates. This guy is one slick empty suit of a snake's oil salesman.

Let's not forget that for 20 years, he was a member of a racist Black church under the leadership of his nutty nut nut of a spiritual mentor Rev Wright, who goes off spewing racist and hateful diatribes. Coupled that with his close connections to an indicted Chicago political crook and former US terrorists from the Weatherman, a US domestic terrorist group in the 70s.

He has successfully destroyed the strong relationship that once existed between the Clintons and the African-American community, by demonizing the Clintons as racists, made personal attacks against Hillary Clinton as the "most secretive, divisive politician", made fun of her years as an engaged US First Lady as "having tea with foreign leaders in the US Embassy", a terribly low-brow and sexist remark, and then had his political campaign ascribed malicious assassination intentions to Hillary Clinton. The newspaper which conducted the interview in which she made this remarks, endorsed her for President, as these remarks were very clearly made in reference to the long US democratic primaries, such as when her husband did so in 1992 and Robert Kennedy in 1969 (when he was assassinated while campaigning for the Democratic Nomination).

This Obama has played the race card very smoothly in destroying the Clintons and achieving his weak "victory". In truth, he is a divisive racist who is race-baiting the Blacks in America to support his candidacy, and has painted all valid criticisms of him as racist and demonized his opponents as racists.

Chun Wai you'll just have to ignore these people from PR who do not know anything from a hole in the wall. All they are good at is try to intimidate people.

Mei Yen, don't say people from PR like to intimidate other people. Actually it is people from PAS and UMNO. Yeah, they exist in both BN and PR. Hallibullah is an ignoramus who don't understand that many people went oversea to study (many with scholarships from foreign universities) because they were denied places in the local universities. I was a straight A1 student, but I was denied a place in a local university. But I was granted a place in an IVY League university with full scholarship. That's why I went oversea to study. Upon getting my Ph.D. degree, I was offered a good job where there were over 100 American white and blacks vying for that same position. But the employer did not discriminate, and they hired me based on merit. That' how I ended up working in America. Because my own government discriminated against me. They refuse to let me into a local university, but instead admitted a whole bunch of students not even fit to enter any university at all.
There are tens of thousands of Malaysians who end up oversea because they were denied places in local universities.

Jed Yoong, you are really pathetic. As a fellow blogger, it is unbecoming of you to take personal shots at another fellow blogger. Don't think you are such a fantastic blogger yourself.
MeiYen, I hope people like Jed Yoong and Halibullah are not from PR becuase they would ba a disgrace to PR.
Yours truly, A PKR member.

While I applaud the American system for accepting presidential candidates of all colours, I do have a lot of doubts about Obama. This young man's style always remind me of the rapidly rising young executives in corporations who climb up by spewing a lot of generalities without solid plans. They go up due to their charisma, and not due to their experience, track record, or ability to come up with solid ideas. During debates with Hilary, Obama's arguments pale in comparison to Hilary. But he had more charisma than Hilary, who appeared tired and cold. Obama also give the impression that he is willing to turn his back on his church and faith in order to achieve his dream of becoming a president. I wouldn't trust such a person.
While I do not like the Republicans' war-like style under Bush, I think McCain would make a better president for USA if the can wean the Republicans away from being so hawkish.

Anonymous at June 28, 2008 10:53 PM, I certainly agree with you that McCain is far more well-qualified in terms of character and leadership than Obama. McCain was a war hero who sacrificed much for his country, spending years of torture and suffering as a POW under Communist Vietnam, and a very honorable man with great qualities.

I am very impressed with his life story, far more than that of Obama. I know he and his wife, Cindy McCain are very generous and compassionate individuals; their daughter Bridget was adopted from a Bangladesh orphanage which Cindy McCain visited with Mother Teresa, during McCain's trip as part of an assistance team to help in the aftermath of the 1991 Bangladesh cyclone.

Truly honorable individuals. Obama, with his con-man and opportunistic ways, pales in comparison to John McCain.

McCain will be the worst president for us - conservative, racist, ethnocentric and homophobic.

Hate to correct you but Burlington is not a small town its a city of over 150,000 people.