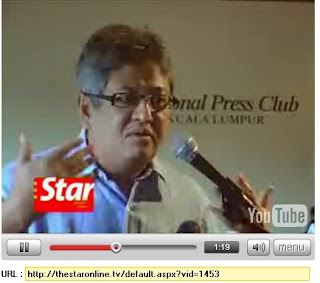 He did not have an easy time. In fact, he was heckled and subjected to some tough questioning on media freedom. But let's not be too harsh on Datuk Zaid Ibrahim. Some of his statements did not go down well with the journos and bloggers as many expected him to play to the gallery. But he didn't. Still, the fact that he accepted the invitation to turn up for the dialogue at the National Press Club speaks volume of this man, who has already been under attack by some of his Umno party members for his reformist ways. He has asked the media to submit the proposals for reforms, so let's do it. It's okay if we have done it 10 years ago with over 800 signatures. He's probably not aware of it. The media, whether print, the electronic and the bloggers, should take the challenge and put a united front for the reforms. For the first time, the mainstream media and bloggers have worked together for a common cause. It's a good start and journalists should engage liberals like Zaid Ibrahim and Ahmad Shabeery Chik to support their initiatives. Let's make representation. All over if we have too. It will be a good start if the one-off KDN can be issued, like Home Minister Datuk Seri Syed Hamid Albar has proposed, as a first step towards the repeal of the press laws. Let's take one step at a time.
Posted by The Writer at 7:49 PM

The media people may have given their proposals 10 years ago, that is a long time ago. Zaid is not wrong to call for a clear stance from the people clamouring for reforms.

Submit your proposals again and if he and the government do not act this time, then, by all means, let us give them what we think they desrve.

I wasn’t there. Even if I were, I would take Zaid’s promises with a generous pinch of salt. It may be bad for blood pressure, but with Zaid salt is better than honey.

Maybe I am the victim of time and of familiarity. Being old and condemned to being a scribe all my life, I think I know Zaid well enough.

We all talk about press freedom, yet very few dare to speak (write) out of turn even on the most basic issues. So what good is greater press freedom if we are afraid to use it?

We can talk about press freedom. But try to tell that to media owners – government and private. If they say no, no amount of freedom will do.

I recent years I have suffered a fair bit for speaking out of turn. When I wrote about a certain editor who bragged in his column about his closeness to the PM, advertisements from my “puny” company were rejected. Only some months ago that it was reinstated. That’s press freedom in flesh and blood.

Even when you’re not writing about politics you can still be punished. You write unfavourably about a company or a businessman, advertisements are withdrawn and subscription cancelled. Sdr, I am talking from experience.

Press freedom is not the answer to all problems. In fact it’s no answer at all if journalists are unwilling to take some risk to express their views.

If there’s no licensing or registration of newspapers and magazines, there will be widespread plagiarism and copyright infringements, and cheap foreign products will flood our small and fragmented market.

And between Zaid and Ahmad Shabery Chek, I place my bet on the latter anytime. At least he is elected by the people.

You are the only MSM GE there today & we are proud of the fact despite you having to endure 4th Floor Boys Agenda setting frequently.

Way to go Brother! Now we need a GE to Help the others Walk The Talk.

May You Be Bless Always Too!

journos should get together just to show the govt they can. and then throw the ball back into their court to see whether they can take the bold step and stop holding invisible swords over the heads of those in journalism.

Anyways, let's not just push for reforms just for reforms sake. The ultimate aim is being truthful without fear or favour. And bringing society out of this hell hole of misinformation and brainwashing.

And yes, nice of you to be there with your journo brothers and sisters.

My, my. Kadir Jasin talking about press freedom? Apa ini. Remember Kadir was the one who bludgeoned journalism into submission during Dr Mahathir's time. Has the leopard change its spots? Those who suffered under Kadir's reign of terror will surely take his words of wisdom with a generous dose of salt. Be that as it may, I admire Wai Kor for having the guts to attend the breakfast meeting with Zaid. You got some balls, Wai Kor, unlike your friends in the NST and the rest of the shit who preferred to play golf.

William Wilberforce campaigned for years to abolish the slave trade. Those who do not know history should get a copy of Amazing Grace to get a peek into the life of this extraordinary man.
As one of the leading English abolitionists, he headed the parliamentary campaign against the British slave trade until the eventual passage of the Slave Trade Act in 1807.
Ironically, he died three days after the the Slavery Abolition Act in 1833 which abolished slavery in most of the British Empire was passed.
Zaid is not wrong to ask for those gathered at the NPC to submit their proposals to him. Ministers come and go and those who are serious about a cause know that it is a process of educating, and reeducating.
We must have the stamina when we want things to change.
The walking and blogging way may be in season now but Rocky should not be too harsh on those who did not turn up (in his blog, he said: "The others mainstream editors are playing golf, too lazy, very contented, afraid, or probably didn't even know what the NUJ, NPC, CIJ, WAMI, BENAR and All-Blogs were up to today."
In his pre-blogging days, Rocky would have engaged the politicians in a different way to convince them of what he is still fighting for now - greater press freedom.
I think all journos share the same convictions but we may have different routes to express them.
On a day-to-day basis, my plea to journos - mainstream or otherwise - is to be just good journos, subscribing to the basic tenets of journalism which have stood the test of time, never mind that now there are different platforms for a journo.
I certainly do not believe that only journos who write crusading and anti-establishment pieces are superior; they also have to prove that their articles have passed the benchmark of good journalism.
It would be interesting to see how Rocky and AKJ would function if one day they return to the MSM.

What is there to meet and talk about. Zaid is close to the ears of the PM, so why talk to the NPC when he can go straight to the PM. So people, submit your proposals and let Zaid show us what he can do about it.

I think Zaid is buying time by asking for a united stand and a formal resolution supported by all journalists on press freedom.

Procrastination is the Mother of All Failures - that is exactly what Zaid is doing, he's simply procrastinating on this issue of press freedom.

We were expecting something more enlightening from him last Sunday.

But Alas! He turns out to be as "lembik" as the rest in UMNO.

It's a brave step to walk with bloggers and to fight for media freedom all these years, in your column and articles on the topic but perhaps less so in practice, ie the content of the articles.

You are right. The old and new media can work hand in hand.

The strange thing is some of the alleged champions of the new media are actually just discards from the old who were on the wrong team. I guess, it was just a matter of time before these returned to the BN fold.

Personally, I think your interview with Syed Hamid, Home Minister, will probably bear more fruit. But camaraderie is always good.

The Star is slowing changing and let's hope they would also expose more corruption and injustices apart from writing more balanced commentaries and news articles.

I like A Kadir Jasin's writting and from his recent posting on Zaid, you know that he viewed Zaid as a liberal. Hence his preference of Ahmad Shabery Chek is consistent.

Zaid needs to talk less and do more. I was angry at his non-nominiation in GE12 but his performance as a Minister so far is inspiring. But he tries and all credit goes to that. He need to nail down one quick win and the public will help him turn the tide.

Let others fight
Submit report and report
And survey of what press freedom is about?
In the end it will be put aside

Zaid's back-door entry to the cabinet could be a blessing to the media practitioners. He seems to be making all sorts of promises and the soundbytes are kinda appealing.You know what I mean. Make all the right noises so that the media gobble them up. He's making his exit plans already. He knows none of his proposals will get past the cabinet so he plays to the bigger gallery. Don't be taken in by his words. OKlah, if you want to hold to his words go ahead lah. But i think he's just trying to make enough sound but won't go far.

Sorry Dato, but I think you and Zaid are the same. Sama-sama cari makan and sama-sama cari opportunity lah. You can initiate your own reforms in the Star with or without Zaid. Try giving my PKR friends some decent play in your paper and see whether the MCA is happy or not. They are all the same Dato. As long as they are politicians, their self interest come first..