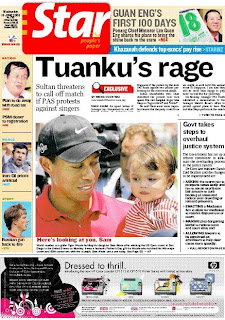 The Selangor PAS Youth has hit a raw nerve. The wing's protest against the performance by Ella and Mas Idayu has upset the Sultan of Selangor. Upset is an understatement. This writer had a chance to speak with His Highness yesterday and he was so angry with the threat made by PAS that he wanted to cancel all future Sultan of Selangor matches. What PAS may not realise or chose not to realise is that the organisation of the Sultan of Selangor Cup comes under the direct purview of Tuanku. He personally supervises the running of the event. He has never asked for a single sen from the state government, previous or present. But what has irked Tuanku is the kind of narrow politics and religious intolerance pushed by PAS. He has made it clear that Selangor is multi-racial and multi-religious. Senior Selangor PAS leaders, it seemed, have washed their hands off, pleading ignorance to what the youth wing was doing. At a meeting between senior editors and Mentri Besar Tan Sri Khalid Ibrahim at his official residence yesterday, the Chinese newspaper editors brought up their concern over the continuous call by PAS to push its syariah law agenda as Khalid tried to allay their fears.
Posted by The Writer at 9:29 AM

Come on everybody! Let's do the dangdut!

The Sultan has always been looked upon as a religious figure and if He's angry, then I believe the entertainers are vindicated. Go on, Ella and Mas! Do your best to "hiburkan" an angry anti-fuel hiking people!

Win points on merit, PAS. Dont practice religious fanatism, and dont ONLY have SEX in your mind all the time

Very Simple .
If Sultan agrees to having Ella and Mas , Being the leader of Islam in Selangor , the Sultan is anwserable to Allah and not Pas leader's who oppose this concert .

Sultan of Selangor I salute you. Nothing against Islam but PAS has gone too far. PAS has always taken women as a sex object. Malaysia is a modern country but PAS is going to take us back to stone age.
Daulat Tuanku

I smell a rat somewhere. I am sure these PAS youth upstarts did not make these highly insensitive remarks out of the blue. They must have planned it before hand, and I see it as some misguided ulamaks who stubbornly refuse to accept the reality of a multi-racial secular society, particularly after the results of the last GE. They are trying revive the Islamic state issue whose phasing out by the PAS professionals they had not been happy about. These irresponsible ulamaks exploiting the extremism of the youth movement are playing right into the hands of UMNO who are desperately trying to form a coalition with PAS on the basis of Ketuanan Melayu and Negara Islam.

Now all those UMNO leadersf who want Karpal Singh charged with sedition for insulting the Malay royalty...I want to know...what is your position regarding PAS youth insulting the Sultan by demanding that Ella and Mas not perform failing which they would stage protest demo..

Will you also report these PAS youth people for sedition? If you don't then, you are clearly hypocrites.

The top PAS leadership committed to PR and the PAS exco members in Selangor should openly castigate their youth and ensure that such provocative and hostile moves not be repeated in future.

Initially when the sultan refused to accept a non-muslim DMB, I was worried. But now I can see that Tuanku represent a Monarch that is for all citizen, muslim or non-muslim alike.

Be more mature please, PAS Youth...should not you consult your leaders if you want to take any actions?....
Daulat Tuanku, you are firm with your decision. You shows to us what is a true leader.

Your Highness, Welcome On Board:)


Think Different by Apple, may all of us aspire to leave this world a better place. CHEERS ke ke ke

Here's to the crazy ones.
The misfits.
The rebels.

The troublemakers.
The round pegs in the square holes.
The ones who see things differently.

They're not fond of rules.
And they have no respect for the status quo.

You can quote them,
disagree with them,
glorify or vilify them.
About the only thing you can't do is ignore them.

Because they change things.
They push the human race forward.

And while some may see them as the crazy ones,
We see genius.

Because the people who are crazy enough to think they can change the world, Are the ones who do.