It's fast and furious over SAPP 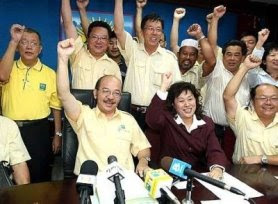 Just hours after the stunning announcement by the SAPP that it plans to move a no faith motion against the PM on Monday, the reaction has been swift. The salvoes have been fired against SAPP president Datuk Yong Teck Lee. His deputy, Datuk Raymond Tan Shu Kiat has said he was not supporting the move, adding that the party did not support Pakatan Rakyat. The Deputy Chief Minister, who was not invited to the press conference today, claimed the supreme council did not give the consensus. The Liberal Democrat Party has asked the SAPP to leave thre Barisan Nasional with the strongest attack from the PM himself, saying Yong's move was a result of personal greed and inability to get what he wanted. There were more missiles from MCA, Gerakan and Umno. And the motion? Nazri Aziz said the motion was unlikely to take place, an opinion which Lim Guan Eng and Lim Kit Siang seemed to share. But Tan Sri Khalid Ibrahim said PKR MPs would back the motion. Over the next 24 hours, BN leaders are expected to huddle with their MPs ahead of Monday's showdown. But the fact remains that the PM's job has become even more tougher now. Stay tune.
Posted by The Writer at 9:40 PM

Tun Mahathir is right - it is impossible to rule this country without two-third majority. Until the next 2/3 majority goverment is formed then days and nights will be nothing else but politics. Forget about fuel-price, food shortages, traffics, crimes, illegal immigrants, floods, etc.. But whose fault is this? Of course the rakyat themselves. They have voted a weak goverment and now enjoying the fruits, albeit the rotten ones, for their effort.

SAPP ACTION TO POST A "VOTE OF NO CONFIDENCE AGAINST PAK LAH" SEEMS TO ATTRACT STRANGE RESPONSES FROM VARIOUS QUARTERS.

NEEDLESSTOSAY, MAINSTAYER OF BARISAN WILL COME OUT IN SUPPORT OF PAK LAH WITH SOME ASKING TO EXPELL SAPP.

PAKATAN RAKYAT SEEM TO SUPPORT THE MOTION WHEN KHALID SAYS THEY WILL GET THE SUPPORT FROM PAKATAN MPS.

STRANGE THAT BOTH FATHER AND SON LIM KIT SIANG AND GUAN ENG RESPECTIVELY OF DAP DONT SEEM TOO HAPPY OR AMUSE BY THE MOTION.

I GUESS THEY WANT PAK LAH TO STAY ON A LITTLE BIT LONGER TO COMPLETELY WRACKED THE BARISAN SHIP. NOW THE SHIP IS BARELY ABOVE WATER, AND SINKING INTO DEEP OCEAN PRETTY FAST.

WHICH IS WHY KARPAL SINGH IS VERY MUCH AN OPPOSITION WHEN DR.M WAS VOCAL IN ASKING PAK LAH TO GO. KARPAL IS PAK LAH NO:1 FAN NOW.

THE BARISAN SHIP CAPTAINED BY PAK LAH IS FAST SAILING INTO BAY OF IRRELEVANCY, TAKING ALONG A BUNCH OF YES-MEN CREWS ALONG WITH HIM.

SAPP SHOULD FIND ENOUGH SUPPORT FROM PAKATAN MPS TO TEST THE WATERS IN PARLIAMEN ON MONDAY.

MEANWHILE, WE JUST HAVE TO HOPE AND PRAY THIS HISTORIC MOTION OF "VOTE OF NO-CONFIDENCE" BY A BARISAN COMPONENT PARTY WILL GO THROUGH AS A HUGH SLAP ON THE UNSHAMEFUL FACE OF PAK LAH.

THE COUNTRY NEEDS A STRONG LEADERSHIP AND PAK LAH JUST DO NOT FIT THAT SHOE.

THE COUNTRY MUST STOP ALL THE POLITIKING AS THE GENERAL ELECTION IS OVER 100 DAYS AGO, AND FOCUS ON THE ECONOMIC GROWTH AND DEVELOPMENT TO SPUR INCOME AND ECONOMIC ACTIVITIES.

THE PEOPLE WANT DEVELOPMENT AND PEACE IN THE COUNTRY. WHATS GOING OVER THE PAST 100 DAYS OR SO IS SO STUPID AND CRAZY TO SAY THE VERY LEAST.

PAK LAH PLEASE GO, HAVE A NICE LONG HONEYMOON AND DONT COME BACK.

The woes of this nation can often be traced back to having a "too strong" government of the past.

Who says "it is impossible to rule this country without two-third majority?" Many countries in this world (US, Japan, most European countries) are running smoothly without 2/3 majority for the ruling parties, some even change governments more than once a year (like Italy) and yet it's business as usual.

Malaysia's problem is not that it's present government has no 2/3 majority, it is quite the opposite: it has enjoyed 2/3 majority for FAR TOO LONG!!! This has enabled UMNO to manipulate every aspect of the running of the country, and has bred corruption almost to the state of point-of-no-return.

What the Rakyat did in 8 March was correct - this country needs a radical change in it politics. But do remember any change at this magnitude would not be painless. The 50 years of abuse would definitely bring up a lot of old scars, just as treating cancer would cause you numerous side effects that is painful to the patient, but, do you want to cure the decease and feel the pain, or do you want to skip the pain and wait for the sure death?

I don't blame the Rakyat as they have their rights to vote for whomever they see fit. And they are watching for their next course of action. Today, no politicians, no parties can shield themselves from being scrutinized by everyone. Don't think we don't know anything if they tried to hide from us. They can do things in secrets, but God will reveal and shout them from the rooftop!

Rakyat fault ? What make you feels rakyat have made the worng vote in last election ? 2/3 CANNOT RULE THE COUNTRY ? Wrong .... it it more interesting not to give for any gov for 2/3 .... giving 2/3 is a dictatorship country ? Is that what you want ? Rakyat have no voice at all ... and the gov do what ever that want ? 2/3 gov for the past 50 years has been damaged the country freedom. Don;t you see it ....the Correct !!! correct!!! correct!!! limgam case, Mismanaged of the country resources, corrupton
and many more ?

2 /3 majority breeds corruption, nepotism and other ism. We need to think differently and governing without 2/3 is not impossible.

SAPP I must salute you. You are the real hero of all SABAHANs. You stand up for the rights of Sabah. I support you 101%. All sabahan will support you. Those who don't support your move are TRAITORS and COWARDS. Sabah must get what is rightfully ours. BN's delaying tactics must be stop.

Raymond Tan is a traitor to Sabahans! He is just thinking of his own blady position. SAPP should sack him from the party. When was the last time he went to check the pulse of the ordinary Sabahans? He probably just hanged out with the rich and the UMNO gang, and lost touch with the feelings of the ordinary Sabah rakyat.

Bluemoon, you talk BS! The real problem is that BN had 2/3 majority for too long, until they think the country belongs to them, and is theirs to plunder and rape. And even the public servants seem to think they are government servants, and they think they belong to BN/UMNO. It is long overdue to get rid of BN. The country has become so corrupt, that corruption is no longer under-table, but is done over-table in broad daylight, and has become the norm. It is like if the people in power don't steal, then he is strange and is out of place. Nothing that is corrupt is shocking anymore. Even murder, and getting away with murder, by the rich and powerful is no longer shocking. And while the UMNO putras hypocritically champion Muslim and Malay causes, they go drink alcohol, gamble, steal, womanize, and marry non-Malay wives. They have manipulated the poor Malay masses who remain poor and lagging behind, while they enrich themselves with the "NEP" policies. Shameful lot of people with have in power in malaysia.