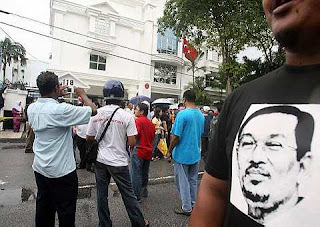 A crowd outside the Turkish Embassy in Kuala Lumpur where DSAI had sought refuge. - Starpic

It's super dramatic. The sodomy allegation issue has taken a new twist with DSAI seeking refuge at the Turkey Embassy since 6 this morning. No one knows how long he will be there following a claim by Dr Syed Husin Ali that there is a death threat against him. Umno leaders have challenged Anwar to defend himself if the allegation is false.

Against the emotional backdrop with PKR saying this is a set up, the police have also doubled their presence to protect the complainant, a former Universiti Tenaga student leader who worked as an aide for Anwar. PKR leaders produced pictures of him posing with an aide of the DPM and ministers. Minister Shahrir Samad, who was among them, said it was common for people to request pictures to be taken.

Despite concern of a possible stand-off between Anwar and the government, it is likely the case would be tackled differently this time. Any immediate arrest of Anwar would spark off unnecessary tension but at the same time, if he continues to hole up at the embassy, a diplomatic row may erupt. The situation is delicate and a strong arm approach would not resolve the case, as it happened previously. Stay tuned.
Posted by The Writer at 7:09 PM

Most malaysians, I'm sure, will be in the dilema wheather to believe or not to. The Malay phrase says that the banana cannot bear fruit twice. Only the idiot will do it - so to speak. Even before the police opens the file, things have moved up by leap and bound. While DSAI is now taking refuge, the man who initiatied sodomy charges against him, was reported to have a good working relationship with the special aid of DPM.

Anwar, the rakyat will support you. Whether you are gay, bi, or straight is not our concern. We just want you to pull Pakatan Rakyat together to form the new government. We have had ENOUGH of the present BN government. Our Malaysia is falling apart from mismanagement.

Sounds like Anwar is now hunted by the old wicked witch.
Anwar, we are worried about you. You need to jaga your backside from the UMNO snakes.
But the more they persecute you, the more the rakyat will support you.

Mmmmm maybe there is an unseen hand. Somebody who wants to create chaos to bring down Bodowi, at the same time have DSAI in prison, as well as C4 out of the way since he is tainted. Now a new figure may appear to take control over as PM with the support of that unseen hand. Who could it be? Yes another conspiracy theory for you to think about. More exciting than Hollywood, and more rowdy and colourful than Bollywood.

DSAI, you better watch your backside. They are coming after you. But we Rakyat will support you.

Sir any comments and thoughts on the expose on Saiful written by Najwan Halimi? Mind you the expose on a trojan horse from a certain Deputy ***** Minister's Office was written before the current events unfolded. In fact, if you go through the whole blog you can find some insightful and illuminating information on Saiful, the alleged trojan horse as far back as 1 year ago!

He has done it again. They say; a leopard never changes its spots. Anwar is so spotted and this time he knew for sure he couldnt escape except to find another hole ie Turkish embassy. He always after the wrong holes. A very sick man with sick ambitions. If he did not do it, he doesnt have to hide. All he has to do to quote Bill Clinton's famous words "I did not have sex with" Saiful hehe. What a dick!!!!

Something is moving, plotted by unseen hands. Our PM is still sleeping. Either someone very desparate, and using very deaperate means to end DSAI attempt to form the new govt. Or by someone who wish to get rid of both badawi and DSAI in one master stroke. The whole thing does not have the hall mark of Badawi. Someone more sinister is at work. Someone more sly and cunning than Badawi. Fingers are now pointing at two possible figures. Who knows, there may be others. Things will get a lot worse before it gets better.
Very concerned citizen.

The fact is, this country is falling apart real fast. Now since BN still have a clear majority in Parlimen, the real cause is UMNO's own in-fighting, and the PM's poor ability to lead. he has lost control of his party. All around him are people working in the shadows to undermine him. They are fighting for control of the party. While on the surface there are two teams, there are others also under the current maneuvering in-between these two forces. Then there are others who were caught doing real bad things, and want to cover up real desperately, and resorted to frightening means to cover up. The economy is going to fall off the cliff.
GECKO

The only way for BN to rule the country is to follow A to Z on what was done to Anwar in 1998 . May need Dr M help to do this . We do need to trust Police will be Fair on this bcos Rahim Noor is retired remember ? As usual Police is quick when it involve "pembangkang" . Maybe there is a special Dept for Pembangkang at Bukit Aman . ? What's the update on Rosma? File Closed ?

The Malaysian government has lost all credibility both locally and internationally. For an embassy of any country to openly accept a political refugee, means that the particular country is looking at Malaysia like a basket case of the same banana level as Burma, Zimbabwe, and North Korea. Sad but true. The people who voted for BN are responsible, but damage is done. The next best thing for you to do is to pressure your MPs to abandon BN/UMNO, and cross-over to PR, and oust this corrupt government. Sitting on the fence is no longer a viable option. You cannot wait until the next GE as it will be too late to save Malaysia from going into a downward tailspin

Now Anwar Ibrahim facing his déjà vu
The old case back to haunt him again
The familiar operation one closes to him
This guy a special assistant…………..
A mole to punch in the most damage
In the opposition leader armor

On the grounds it seems
The people in power want to divert
Problems affecting them, the party and country
So this is what they cooked up
Sizzling sensation one more time

It's ironic that Anwar seeks refuge at Turkey embassy. And from that embassy he made allegations of government's conspiracy, fabrication of evidences by IGP and AG as well as claims that Najib is behind the sodomy accusation etc..etc. Turkey unfortunately was responsible for the massacre of millions of innocent Armenians, thousands of Kurds, brutal repression of the opposition parties, imprisonment of women who wear the scarf and other human rights breaches. The military too has full control over the govenrment.

DRAMA! DRAMA! DRAMA!..What a great way to get International Attention. Talk about paparazzi, to be in the news worldwide and...ohh the sympathies. I'm not really into politics, just a simple housewife. It's really scary to imagine a man who hopes to be the "next" PM to be running for cover in a Foreign embassy? Man or Mouse? Even the late Benazir Bhutto of Pakistan or Aung Sang Suu Kyi of Myanmar or Morgan Tsvangirai of Zimbabwe, Opposition Leaders who did not even run to any Foreign Embassies for refuge. They were prepared to face the true facts as strong Leaders and trusted the people to be the judge. Maybe DSAI felt he is more human to be seeking humanitarian refuge and safer with foreigners. Woww..DSAI surely had created a precedent and given many this idea of taking refuge in foreign embassies on the pretext of just a visit. DSAI claimed he was invited by the Turkish Ambassador to take refuge in the embassy, but seemed it was not so. Hmm...DSAI making a white "lie"? So disheartening that a respected Foreign Dignitary had been implicated and being dragged into this Malaysian Hollywood/Bollywood political drama. I am proud to be Malaysian and if DSAI feels that Malaysian Security cannot even protect him, then how will he be able to stand up for Malaysians if he is such a weakling? Can someone enlighten me, pls