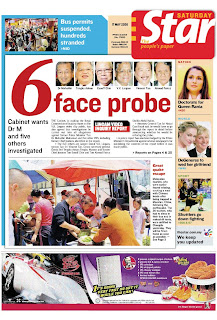 Expect reporters and editors to be called up by the police soon. So would members of the Royal Commission and government officials involved in the inquiry. The PM has also said he supported the police report lodged against the newspapers which published news of the commission recommendations before it was made publicly. The media has protested against the report, saying it has nothing to do with the Official Secrets Act while the Cabinet is peeved that the press beat them to it. But that's how the media operate. The media is doing national interest by publishing the outcome of the inquiry. In any case, there was no "earth shattering" news relevations in the report. The media has a duty to inform the public of what they know about the investigations and recommendations. It is a waste of time and taxpayers money for the police to spend their time recording statements from journalists. I am sure they rather spend their time fighting crime.
Posted by The Writer at 9:40 AM

The cabinet ministers
They have nothing else to do
Tell me what news can you cover from them?
No front page news sometimes nothing at all

The ills of the country
Corruption, lies and deceit
They dare not spin it
They know how it will work

Now the errand boys
Police report made to find out why
Who blew the RCI report to the press?
Important cases they don’t say

Say one thing doing the other way
Free of press yet put a damper stick in
So how good are their slogans?
A pity never knows how to walk the talk

The cabinet ministers
Getting up late never read the ground
Of what are whispering what people say?
It is the black night for them……….
Up in the dark castle they don’t feel the pulse
Of the people needs……..
And reporters right to publish
When they get the snoop

"... Work with me" - my foot. If Mr PM can't do his work, then he should let others do it. Some matters are matters of public interest and should not be left to the whim and fancy, pleasure and leisure of clueless sloths. Please understand that while some Malaysians choose not to work for the PM or with the PM, they are not necessarily working against the PM. That the findings of the Royal Commission into the Lingam's case be made public is a foregone conclusion. Even if he had wanted to, the PM would not have been able to keep the lid on the matter. Had he said nay, the outcry would most definitely have wiped out the precious few brownie points he has to his name due solely to the decision on the independent judicial commission, the independent ACA and the reparations on the wrongfully dismissed judges.
The brave dailies who are being investigated for breaking the story should be thanked instead of being hassled. And not just by Malaysians at large, but by the PM himself for having helped him to do the right thing right.

sandiwara.
who gave the news to the star? will the star publish without an ok from PM?

sure or not? gomen and gomen-controlled media fighting. since when msm editors grew balls? picked some up in the aftermath of the march 8 carnage? tsk tsk. eunuchs.