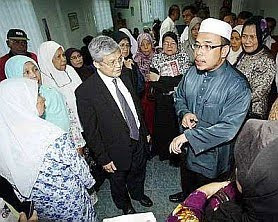 Former Perlis Mufti Dr Mohd Asri Zainul Abidin has plenty of admirers. But that comes with a price - he also has many enemies. Some see him as a threat to the positions they are holding in government-financed agencies like the Yayasan Dakwah Islam (Yadim). Then, some in PAS are nervous of moves by some party elders to woo him to join the party.
In short, there are ulamaks in Umno and PAS who are feeling the heat because of his popularity. The progressive and liberal set like Zainah Anwar and Marina Mahathir openly support him and today they were in court to lend their support. The more conventional Muslim groups, including the Association of Syarie Lawyers, want him stopped. They find his ideas too progressive for them. To them, it's radical, not progressive.
But Dr Asri can be sure he has few friends in JAIS or the Selangor Islamic Affairs Department. JAIS comes under the purview of Selangor PAS chief Dr Hassan Ali. Dr Asri has complained that he has been unable to get permits to preach in Selangor, a requirement for those outside the state. He has not named names but insinuated that there is a "hidden hand" behind the arrest.
He has also openly accused JAIS of being biased but the latter has rejected the accusation. MB Khalid Ibrahim has issued a middle-of-the-road statement, without wanting to commit himself to any stand except to acknowledge that JAIS has the power.
Despite being wooed by Umno and PAS, Dr Asri is said to have been advised by Dr Mahathir Mohamad to stay neutral. He has accompanied Dr Mahathir on trips overseas and is said to have sought the advice of the former premier regularly. Read Joceline Tan's analysis on Asri.
Posted by The Writer at 9:52 PM

Suddently, seemed that the institution of state is controlled by the state?

But in reality as in Perak, these institutions are nothing more than arms of UMNO. Can JAIS be any different?

JAIS is not controlled by the state government. Their root is directly under JPM. Only MAIS is under Religous affair exco. So what? Is it true when Najib say he do not know anything about Asri'sarrest?

JAIS is not under state government. It's under direct purview of Sultan. As is all religious authorities.

That's why, if you recall when Nizar was Perak MB, he replaced head of Perak Religious Authority, Sultan reprimanded Nizar for acting out of jurisdiction and reinstated the guy.

Heck, even the Exco for Agama, Hasan Ali, is not allowed to make statements relating to Islam in Selangor. See
http://www.bernama.com/bernama/v5/newsgeneral.php?id=443169

"He said there were five religious authorities with jurisdiction over Islamic religious administration in the state, namely the Sultan, Mais, state Mufti's Department, the Syariah courts and Jais."

If the trend is not reversed and reversed quickly, we are gong down the slippery road.