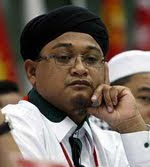 PAS Youth wants to set up moral police squads in every state. Its Youth chief Nasrudin Hassan Tantawi (picture) has said they would even take off their turbans and robes for casual attire when they visit "sleazy joints" - presumably massage parlours, bars, pubs, clubs and other premises deemed immoral by PAS.

Their mission, according to Nasrudin, is to "save lost souls" and to do that, these morally righteous and super clean politicians were prepared to go to even red-light areas to reach out to youths living in a world of sin. That's a lot of sacrifices for these guys!
Even non-Muslims would be advised on the premise of morality, culture and Eastern values. Nasrudin said moral squads would be mobilised in every state to carry out anti-adultery and anti-vice campaigns. To do all these, these PAS activists would go under cover. They would try to dress like everyone else, for once. Most would still keep their beards, we presume.

Most of us would also wonder whether they have any authority and whether they would even be kicked out of these premises for being a nuisance to customers, especially pub crawlers, who just want to have their pint of beer and watch EPL matches. And if a woman is giving a decent and proper massage to a man, would they be advised to be moral?
The super-conservative PAS Youth leader called for the Beyonce concert to be banned, saying "it would erode the moral values" of the young people. We can be sure this news item would make it around the world. These guys must have not nothing else better to do.

as a voter in selangor, i will still vote for pakatan rakyat.

Looks like you don't know the difference between 'to reach out' (dakwah) and to enforce....

Niamah!
I think they are looking for trouble.

PAS is right in discouraging muslim and non muslim the evil of these places...

drinking-gambling-womanising are not part of the chinese culture..and forbiden by major religions.

what say you Wong Chun Wai..

he is sexually supressed may rape any bithes .be ware keep yr bitches home!

PAS is right in discouraging muslim and non muslim the evil of these places...but who give them the mandate to become the moral police squad? Are they morally more superior than others that they can "save the lost soul" in the name of religion? I don't quite agree. To me it looks just like the Witch hunt during the medieval period in Europe. Intention is good, but I have no faith in the execution. Better use the moral squad to watch out all the politician from swindling the public money.

Bangsa Cina Malaysia, you of course can forbid your children to drink beer or go to pub etc, you have the parental right. BUT who is PAS youth to me or to the public in general? What right have they got over my private life and my freedom of leading a life or a lifestyle of my choice?

Aiyo WCW u so clever to write about PAS..how come u never write anything about MCA??

The holier-than-thou may end up impersonating the authorities to get a piece of free ass for themselves. Watch out for more "molest and rape" cases.

drinking,gambling,womanising are parts of every culture since Adam and Eve,it's the degree and restraint that makes the difference.

Hypocrisy, is not going to make this country any better.PAS is barking up the wrong tree.Their dakwah movement should go to spreading good values to rapists,incest and our youths that indulge in taking drug and involved in Mat Rempits.

Most incestous rapes happened in the kampongs and these are the areas that PAS should concentrate their dakwah efforts instead of wasting time,getting high, going to pubs and nightclubs to nap people who are just having a decent evening out and a jolly good time.

I certainly will not vote for Pakatan and I would urge all sensible Malaysians not to turn this country into another Pakistan.

If they actually do go around to nightspots to preach about morals and values to both Muslims and non-Muslims, things could really, really ugly.

They will be looking for trouble because trouble is what they will stir up and I fear that some pub patrons might get angry at having their evening ruined by some moralistic, self-righteous misfits.

This could lead to incidents of extreme unpleasantness.

PAS has unfortunately never seemed to grasped the notion that it is one thing to reach out to others in friendship and genuine caring. All they want to do is threaten, bully and oppress. Who in hell will want to submit to that!!

Might I also say that while abuse of alcohol, drugs, free and easy sex and other destructive habits are a menace to society, if those self-righteous, sickeningly moralistic PAS Youth die-hards genuinely care about the plight of Muslims, why is it :

(1) they are not doing anything about the many, prominent Muslims who are actually on the boards of breweries, tobacco companies (after all a fatwa was passed against cigerette smoking decades ago), and perhaps even involved in one way or the other with gambling?????????

(2) Why are they not demanding an enforcement of that fatwa against smoking? Instead of supporting the caning of Kartika who took a few sips of beer, they should go after the thousands upon thousands of Muslims who smoke! Or are we to take it that if PAS choses to disrespect that fatwa then Muslims can chose to disrespect all fatwas?

(3) that they have chosen to completely ignore the growing menace of the Mat Rempits who are clearly misled Malay boys and their girlfriends (it is bad enough that UMNO seems to defend and protect these criminals, but for PAS to do the same by refusing to speak out against them shows their moralistic superiority is just a damned act of hypocrisy).

(4)they diligently refuse to take action against the countless irresponsible Muslim men who abandon their wives and children; men who won't work but force their wives to do so; men who marry second and even third wives and do not provide financial and emotional support for the first wife and her children. Do these moralistic prigs in PAS not care about what happens to these poor, defenceless women and their children? Apparently they not only don't care, they just don't give a damn!

And there are many, many more situations where Muslims are involved in un-Islamic activities for which PAS Youth consistently refuse to say or do anything.

Even a primary school kid will tell you that they will not do anything about these Muslims because it does not serve their agenda. So they are not about Islam, they are only about their own sneaky agenda. And yet they continue to believe that people actually buy their flimsy excuse that they are all about religion.

PAS Youth, don't be like those morons in BN who still believe that Malaysians are incapable of analysing and arriving at the truth.

These primitive Al-Qaeda type/led/controlled Muslim men are nasty as anything! As usual - who will be the main victims? Women/girls/gays of course! Why do they regard themselves as if they are God and judges, even in the believers/non-believers' personal lives? Malaysia is going down the drain; especially now with this kind of primitive men wanting to lead the Opposition party! Why has Anwar been silent on all these - especially presenting himself as soemone who believes in democracy and modern values including Universal Human Rights?

Great job that they intend to do. And while they are at it, they should also go into every kampung house and search out the fathers, grandfathers, uncles and brothers who rape their own family members! They will be kept so busy doing the job of their God by keeping the sinners at bay. Good luck PAS!

Keep going Clean up the joints. I SOKONG.