Even Fortune magazine gets censored! 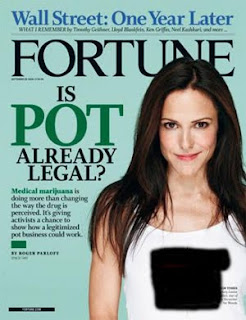 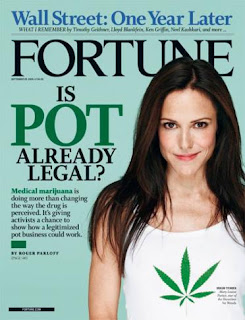 We have seen how the censors ridiculously black out pictures of topless tribal women in National Geographic but even financial magazine Fortune has not been spared. My September issue of Fortune came with this shocking censorship.
On the cover is a picture of actress Mary Louise Parker, who acts as a single mother who sells weed to support her family in the hit TV series "Weed." On the right hand corner, our censor's black marker pen "censored" out something. I was not sure at first what was on it but as you can see from the cover above (which can be easily found online), what our censors found objectional turned out to be a picture of the subject matter being discussed.

The cover story is about medical marijuana and how it has been made legal in many parts of the US and Europe. There's an interview with the head of the US Drug Policy Alliance, who favours marijuana legislation on a tax-and-regulate model. Back then, he argued, the older generation of Americans did not know the difference between marijuana and heroin. "Now that generation is gone. The people in power are baby boomers, a majority of whom actually smoked marijuana."

The three past presidents, more or less admitted trying weed. Bill Clinton famously said - "I did not inhale" when asked if he had tried weed. Barack Obama, when asked if he inhaled, retorted: " I thought that was the point." Only in the US would we get such quotes!
Posted by The Writer at 11:40 AM

WHAT EXPOSURE TO CENSOR?

The censor is educated in the Malaysian education system. He is unable to tell the difference between the female mammary gland and a stylistic image of the marijuana leaf


What do you expect?

I just took a look at my fortune issue received yesterday. The picture wasn't black out as you said.

Hahaha ! Now DS WCW, this is the work of the UMNO government, not PAS! So you can see that idiots are found everywhere.

I wonder if this is Rais Yatim new policy on pornography and other undesirable contents. He is getting his censors to be more liberal with their black ink.

I would love to see what will happen to the sexologist's text book.

I bet no one even looked there but just read the headline and went on!

Maybe some people just wanted to buy more black marker pens. So they have to use the the marker pens more liberally to finish the ink quicker.

I have a feeling that all these people in the censorship institutions were educated in the sekolah pondok. You know, those mentally impaired kids that have difficulty following classes in the regular schools, and their mamas send them to the sekolah pondok, where the gurus accepted them for brainwashing.

Our government censors say her T-Shirt is too tight, so the offending spot needed to be censored. That's what happens why you elect goons to run the government, who in turn hire stupider goons as head of institutions, who in turn hire even more stupider employees. The only criterion for their hiring is that they all support umno.