RM300million, one year old and it collapses! 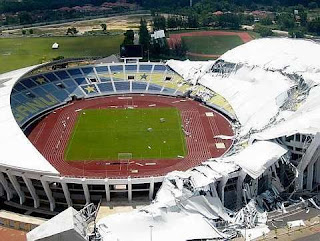 Click on photo for more photos via Star Online's photo gallery
It's shocking! How can a stadium that's touted to be the "Pride of Terengganu" collapse after just one year and built at a staggering cost of RM300million. The only saving grace is that no one was killed in the incident, when a section of the roof collapsed today.

The stadium was "rushed" it seemed to be ready for the Sukma Games last June. The contractor is said to be a South Korean firm and certainly the firm would have plenty to explain. One does not need to be an expert to conclude that a lousy job has been done.

Investigations have been promised by the authorities but we hope the findings would be made public. It should now be standard practice in cases where public money is involved. Like the PKFZ losses, the public must know who is at fault for the collapse of the roof. The damage, we are now told, could cost us at least RM35mil.
Posted by The Writer at 9:10 PM

Zzzz ..nothing will happen :)

Yeah ..there will be some initial politically correct statements. Promises of investigations will take place. Then nothing will happen. It is so frighteningly predictable. What have happened to all previous cases??? Highway collapses, leaking roof, non-functioning air conditioning, collapsing roof and ceiling, collapsed GLC, mega corruption casesm etc etc. ...have you seen any corrupt politician and government people going to prison?

Of course nothing will happen. What do you expect? It is so predictable. Politically correct press statements will be made. Promises of investigations. Then Nothing more. Now can you blame us all for getting sick of the BN government? All we ask for is responsibility and accountability. But that is too much to expect from our government. There is a long long list of scandals that have disappeared from news.

Who is to be blame for this mishap. It would occur again at other places in time to come if there is no check and balance to the present government or it should be replace with a capable and responsible government. There are many mishap such as this happen and it is swept under the carpet and the public and taxpayer don't know about this. Such a waste of taxpayer money. What say you should the administrator be change or still be satisfy with the old regime and let things bypass and gradually it woud be forgotten.

Where is your out rage? Public
money wasted and squandered time and again.

But has any SENIOR civil servant let alone the relevant Minister ever been held responsible?

That is what is ailing this country - Minister with no shame, no compunction. And incompetent at that.

By the rate we are going, we will soon rank along side Timbuktu.

What a bloody joke.

Yes, there will be an internal inquiry. Then, maybe after Cabinet approval, a public statement. Then, ........... nothing.

Those responsible will get away scot-free.

I am not surprise, as a project manager i have worked and come across many such projects were awarded to political link 2 dollar company, and they will search the lowest priced contractor to do the project.
i won't be surprised the whole project will need to demolish!!!!

Korean contractor not around anymore.
So it is easy to blame that company.

But I dont think the Korean contractor is the prime. Malaysian govt dont sign contract with foreign company. So who is the local company that is fronting this. Catch this guy. This is the middleman who siphons off the money at the top. How come no one talk about him?

The company that finally build the stadium probably had very low budget to carry out the task.

I REALLY BELIEVE IT INEVITABLY POINTS TO CORRUPTION!!!!

THE QUESTION IS, WILL ANY ACTION BE TAKEN AGAINST THE GUILTY???

Made in China one better. The Birds nets will be as strong as the Great Wall.

i agree - investigations will find that blame cannot be assigned to any one party and nothing will happen.

the disease is in our blood and like aids there is no cure!

More bad publicity and shame for the country. Malaysia Boleh has become a joke abroad! As a Malaysian, I'm truly embarrased with the way things are happening in this country.

biasa ma siphoning money away giving the government and people a lousy deal. now see the whole roof collapse. let's just pray that this whole nation will not collapse.

Pakatan Rakyat supporters' loud yelling caused the vibrations that could have loosen some bolts and nuts, and so the roof came down. But don't worry. Another incompetent contractor will be awarded the job of clearing the debris (to be dumped in some place nice), and another bad roof will be built. More mullah.

Baresheen, please don't insult Timbuktu. They don't build roofs that collapse. In fact the mud walls and mud roofs there don't collapse like our expensive stadiums.

The RM 35 million repair job is before cost overrun. And then after that it will double when the other part of the roof collapse also. And then when the constructionb workers screw up the turf, they will have to spend more to repair the turf. And maybe the actual cost will be even much higher than original estimate because there will be no tender, and it will be a "fast track" project to get the stadium ready quickly for the scheduled events there.

Are we sure no one died.

MRR2 also nothing happened, Bukit Antarabangsa also nothing happenned, What would make this any different from this? Seeing that it cost RM300mil, lets not kid ourselves, the contractor is linked to someone up there so how to touch?

Will be interesting to see how fast The Star covers up this story.

I presume the construction of the stadium was without open tender and "suka-suka bagi" policy.This I believe must be the reason for the collapse as poor quality materials are used to construct the roofing.

I shudder to think what if the King and thousands of spectators were under the roof when it collapses.

Datuk, see, you as chief editor of The Star should do something to help Malaysia avoid tragedies and losses like this which probably stem from this dastardly patronage system practiced by the darn BN. As owner of this blog called New (better?) Malaysia, you have take steps to highlight any positive steps that can help revamp the system of ruling this country. For example, the Pakatan Selangor State Government has blacklisted those involved in the loss of life at Jaya Section 14. Please make sure your newspaper highlight this on the front page.

Datuk, see how Pakatan rule the Penang state: shoppers to pay for plastic bags. That should have been implemented years ago.