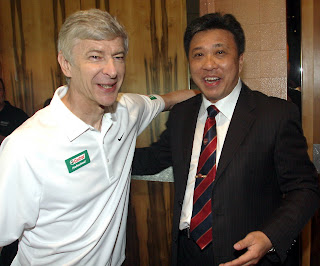 No politics today, just football. I had the opportunity of meeting Arsenal manager Arsene Wenger on Monday. Yes, the legend himself, at the KL Hilton, where he was staying.
The Frenchman was in KL for only 48 hours but his presence was enough to get reporters from Thailand and Singapore to fly down to interview him. It was his second visit to KL. This man obviously lives, eats and sleeps football. His spends his free time watching football on television, saying this helps him relax as the games do not involve Arsenal!
Friendly and chatty, he readily posed for photographs with members of the media as well as fans who caught wind of his presence in town. He's also as tall as he looks on television. He's much skinnier though without the jacket and tie.
Wenger is also a very technical person. He talks about performance, skill and talent. No wonder, he is called The Professor, not just because of his degrees in engineering and economics, but his analytical skills in football.
He still speaks English with the French accent, which we are familiar with but it's easier to understand him than Alex Ferguson, I guess!
Despite the attempts of the sponsor to keep the location a secret on Monday, it did not really work 100 per cent. Yesterday, over 1,000 fans turned up for the public event at Dataran Merdeka to get a glimpse of this lanky fella.

"In mah 18 years at thes clob, 'at was th' warst pear-forrr-mance we hae ever prrroduced in th' FA cope."

..ah..this is one time I really envy you guys..just watching that pic of you in a buddy-buddy pose makes me drool..

Alex Ferguson cannot speak English. He speaks scotlish. I am suggesting United employ a translator for him when he opens his stupid mouth. At least Wenger speaks better English. Sorroy for spiaking off tangent, Alex. Your English is harrible, Alex, da yau knaw tat?

Someone should have ask him about his famous comment "I didn't see it" ....

Dear dato seri,
Congratulations!
U hav made it!