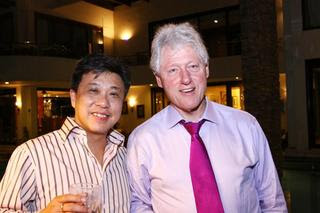 I had the privilege of catching up with Bill Clinton when he was in KL for 24 hours to give a lecture at the KL Convention Centre on Friday. If previously, I had only about 30 minutes for the interview in New York, this time I had the honour of talking with the former US president for at least two hours. This time, there were no over-protective aides.

Together with others in the group, which included US Ambassador James Keith, Clinton shared with us his impression and views on a broad range of issues. From state funerals he had attended to corrupt leaders, he had plenty to talk about.

Luck was with us as he was in a talkative mood. He spoke about the leaders he had high regards for and they included people like Jiang Zemin, Yasser Arafat and Nelson Mandela. He spoke well of Tun Dr Mahathir Mohamad, particularly his handling of the 1997 financial crisis. The decision to peg the ringgit, he told the listeners, was a right one. While it may not work elsewhere, certainly it worked for Malaysia. Interestingly, Clinton said he used to talk about the Malaysian experience at the White House with his aides. When I spoke to Clinton in September, he talked about Malaysia's consecutive economic growth during the Mahathir years. He could even recall the figures.

I remember talking to Dr Mahathir immediately after he stepped down as PM. He told me that the 1997 crisis was the most difficult moment in his 22 years as PM and certainly, he had sleepless nights when he decided to go ahead with the unconventional decision. The early telephone calls that came in after he made that move included one from Hong Kong tycoon Li Ka Shing who assured him it was a good decision.

The global economic crisis was a popular talking point with Clinton on Friday night at the home of his host, businessman Vinod Sekhar. All of us were eager to find out how Obama intend to lead the country through the recession. For Clinton, the president elect is "a smart and sensible man," who wanted to prove himself. For Malaysians, the question was whether Obama, with his close links to the powerful trade unions, would be protectionist in his trade policies. His campaign reportedly received US$200mil in funds from the unions.

After all, previous Democrat governments had used various issues like human rights, child labour and the environment to impose new rules on trade in developing countries. Asian countries were often the target. But Clinton said he believed Obama would not be protectionist, saying he had tried hard to reach out to the world. That question, according to Clinton, was posed to him when he met the PM and DPM. Clinton promised to convey to Obama the concerns of Asians on this issue and their perception of the new president.

But more importantly, it was good to see Malaysian leaders from the BN and PR turning up to listen to Clinton at his lecture. The man was given a standing ovation, at least three times, and as we listened to the man, many of us must have wished that our Malaysian politicians could be like him. We surely like to see and hear more substance.
Posted by The Writer at 9:39 PM

Why go ga ga over him. Was'sn he the same guy who sent his VP Al Gore to Malaysia to insult us?

We have such short memory!

When we travel abroad Mahathir made us proud as a Malaysian . He giving Malaysia the pride.

Nothing so special meeting him.Unless Obama!

I'm stll waiting for your new snippet. A bit tired of watching you and Uncle Bill!