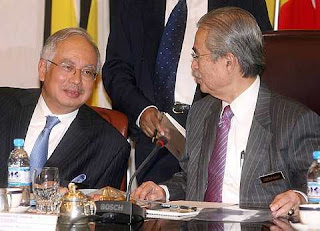 The Barisan Nasional supreme council meeting is still going on but the SMS that is flying out from the room at the PWTC is that Abdullah Ahmad Badawi has informed the heads of the component parties that he is not defending his Umno president's post. He also told them that he would step down in March. Deputy Prime Minister Najib Tun Razak will take over. Until this morning, some Umno leaders were still attempting to persuade him to defend his post. A group also gathered at the PWTC to express support for Pak Lah. At the meeting, Pak Lah said he would also be giving up his position as BN chief by March but he will not slow down his reform efforts in government from now until March. BN component party leaders are expected to tell the media that they respect his decision to step down in March.
With Pak Lah's announcement, the 191 divisions are expected to nominate Najib for president. It isn't clear whether he would have a running mate but Muhyiddin Yassin is regarded as the most serious candidate for the number two slot. The party polls would be crucial for many as it could well determine their positions in government, especially at the Cabinet level. The assumption is that when Najib takes over in March, there would be a Cabinet reshuffle.
Posted by The Writer at 3:53 PM

Why they don't go for each other throat?

Wah, your blog even faster than Star Online lah!
Anyway, this is the best news for Malaysians who have been led down the garden path by Dopey for such a long time.
Thankfully, he chose not to take the long and winding road by contesting the Umno elections.
I guess he knew what was coming, although the sycophants and cronies tried their best to get him to put up a bitter fight to the end.
His decision does not spare him humiliation but at least he is going with a small dose of dignity.
I wonder what the son and son-in-law will do now.

It is a shame, Abdullah has let the nation down and deserves no sympathy. The world is facing the worst financial crisis and he is leaving his post...like a captain jumping off a sinking ship!
Basing on Anil's poll, majority of Malaysians, are not in favour of Najib taking over.
UMNO's system of picking a transitional President, also becoming a PM, is a mockery to Democracy and a kick to the face of the rakyat. How could a few warlords in UMNO, determine the future of Malaysia!

Really hope the news in the sms is true.Definitely feel that the lame leadership from Pak Lah has stop as soon as possible.

FROM BAD TO WORSE.

Oh no!!! I hope this is only a rumours! Please don't step down Pak Lah!! Pleaseeee...

One down, one to go. Will you Datuk pen your thoughts whether the passing of baton to his deputy is democratic and also whether the pm in waiting is capable of carrying out his duty as a true pm for all malaysians and without any baggages. Are we having an Honest and Clean PM with integrity?

SAD EXIT FOR HIM. HE TRIED BUT IS JUST NOT UP TO THE TASK.

PAK LAH IS A GOOD FOLLOWER RATHER THAN A LEADER.

WE CAN ONLY PRAY THAT THE NEXT PM WILL BE A MAN OF INTEGRITY AND BE FAIR TO ALL.

The economy is further worsening. This could create more political uncertainty.

If it is true he is a quitter, he doesn't deserve the respect of Malaysians, friends and foes.
If he thinks he can do his job as PM till March, he is dead wrong, it will not work.
Malaysian leaders are made up of people who has no fighting spirit. Will he also cry like the former PM.
He will regret just like Che Det.

Who is the best person to lead our country now? Many do NOT agree to Najib as the next PM! He has many skeletons in his drawers. So, we are under the curse or can we come out of it?

There's nothing to celebrate, Pak La was the one who gave us the freedom to express and Malaysians are now bold.

He might have been a soft leader but i'm thankful. I hope he completes the rest of his promise ie independent judicary,ACA and sends the corrupt where they belong.....

Remember, a leader is only good when all his team players are 100% behind him..... in Pak Lah case it evident they all "stabbed him from the back".

Lets hope PR will be able to form the Govt by the ke ke ke.

I think for once Pak Lah had made a very good decision for himself, his party UMNO, Barisan Nasional and the country.

He had listened to the masses and the peoples wish rather than his close advisers who had failed him miserably all this while.

Congratulations Pak Lah. At last you had redeemed youself to be a true leader in sacrificing a position of power for the sake of Malaysia.

He is now back to the nice person as we had known him best and like so much.

Aiya, old man MM thinks he can put this new PM that can be contolled by him, just like he thought he could control sleepy one. But he forgot that he left a legacy where the PM can do anything he wants. He has thought them to hold three jobs: PM, Min of Finance,and Home Minister, and then the PM can kaput anybody he wants. Ha ha old man MM, I can bet you that this new one will be harder to control than the sleepy one. So, MM, you can forget about resurrecting your dynasty.

Badawi did not have the basics of managing a team. He should have used the carrot and stick approach. It always work, even in the corporate world. And if anybody in UMNO tries to be an a**hole, he should have used a hammer and whack it down again (Japanese style of management). That's the only way the UMNO warlords understand.

Badawi made the right decision. UMNO is full of problems. BN is full of problems. The economy is full of problems. All three are about to implode. SO why waste the next few years of his life trying to manage this unwieldy mess when he can throw in the towel, retire,and enjoy the rest of his life in luxury doing whatever he feels like doing, looking at UMNO,BN,and PR battling it out. And just like old man Tun,he can now and then open his mouth to quote some wise cracks, and sit back and enjoy the scene of all the politicians getting riled up and upset. Quite fun, actually. So, Badawi, let all these politicians and people say what they want. You can now take it easy and go enjoy your life. You don't have to give a F*^% what happens next in the Malaysian political scene. I hear there is a nice place in Australia you can retire to. You can even get your favourite mamak food there. I would have done the same thing if I were in his shoes, except that I would have whipped all those bastards who back-stabbed me, and I would have freed all those under ISA, abolish the ISA, and given ammunitions (evidence) to all the Pakatan activists to go pursue those who had backstabbed me.

What good news are you all talking about? I tell you, you guys don't appreciate Badawi until he is gone. And then when you have Najib as the new PM, you will cry and wish you have the good old days (Badawi era) back.

So sad that our country have to go through this political turmoil after more than 50 years of independance. Whoever that takes over need to do alot to put back whatever confidence that has been eroded! The saddest part, we do not have good leaders who are far sighted enough....