US and UK envoys stay away from Parliament 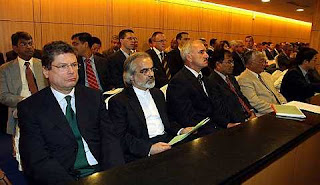 Some of the envoys present at Parliament during the special session
Political differences were set aside today when MPs spoke up against the Israeli attacks on Gaza at the Dewan Rakyat. The Star SMS Alert reported that 44 ambassadors and 32 charge d affairs based in KL attended the special session of Parliament but the US and UK sent no one. Meanwhile, Israeli PM Ehud Olmert has said that victory was in sight and that Hamas would be wiped out, hinting that the offensive was ending but latest reports said more soldiers have been sent to Gaza. My colleague, Shahanaaz Habib who is now at Rafah, Egypt, told me a few hours ago that she could hear the continuous bombing from the border town. Humanitarian aid, she said, has been slow and that aid workers had problems getting into Gaza. The chaotic situation has caught the Egyptian authorities off guard because the border town has no facilities. It is not designed as an entry point for food and medical supplies on a big scale and certainly not set up for trucks to pass through. The opening of the border for ambulances has put enormous pressure on the Egyptians, particularly from the security aspect.
Posted by The Writer at 4:08 PM

dtk bro,
prior to any international effort to bring israel and palestine to the round table or any peace forum, the main task is still to unify palestine's two major factions - hamas and fatah. should they fail to work out a peace plan among them, the international package will come of no use. we cannot deal with just one section of the palestinians as both claim to be the legitimate authority. we should any faction refuses reconciliation, we should apply the right pressure as to produce on the right authority for the peace talks. i have been in gaza, west bank and golan heights during the 80s and found out that the infightings among palestinians normally would lead to their stray rokets hitting israel territory. this was is not about religion but about humanity, aggression and suppression. with about 2 million people still fighting hunger in africa and some parts of the world, and with more serious conflicts remain unattended to in southern sudan, we need to be fair to everybody. this is about humanity, nothing more.

If Hamas and Fatah cannot get along, then maybe it is easier to have two Palestinian states, Gaza and West Bank. Nothing new, we have got Bangladesh and Pakistan, which used to be one country that could not see eye to eye. We have got North Korea and South Korea. One day when they can see eye to eye, they can unite into one state again.

The Arab country talk a lot but like NATO also 'no action talk only'..Hosni Mubarak must open the border for food and medical aid..

The issue here is not having 2 states or 3 states. The issue here whether Hamas' ideology of not recognising Israel as a nation. They just want Israel to be wiped out or disappeared. In this respect, peace will never come. When Mr. Blair wanted to rebuild Palestine (collecting few billion dollars along the way), Hamas fired some rockets into Israel! When peace began in Lebanon and the Israel's army moved out, Hizbollah attacked the soldiers and kidnapped some resulting in war nobody wanted.

And now this, Hamas, without realising any consequences at all for their own people, attacked Israel again. Don't tell me that Israel should sit down and not defend themselves. I don't agree at all the use of excessive force in this war, but Hamas must also take blame for this escalation.

I pity the Palestinian people who stood in between. I pray that both sides to stop their stubborn antics before more people get killed.

Now we can understand why the Mumbai attackers asked for British and American citizens...The thing that beats me is why is everyone focusing on asking Hamas to stop firing their rockets into Israel? The issue we should focus on is why is Israel still occupying Palestine? When will they allow the Palestinians to control their own borders and their own destiny. Unless the Palestinians are free, no amount of peace talk will be lasting.

Why dont Fatah and Hamas fight it out? Then the international community can re-start the peace process.

The democratic process will not work with these two. The only way is to fight.

I sympathies with the Palestinian people. But there is no other way.

I AM CHINESE AND I SUPPORT 100% IMPLEMENTATION OF HUDUD LAW.
WHY ??
BECOZ CRIMINALS ARE GETTING MORE MERCILESS NOWDAYS.
SINCE THEY ARE MERCILESS WHY SHOW MERCY TO THEM.
EVEN AFTER ROBBING THE VICTIMS ARE KILLED.
MORNING JOGGERS ARE NOT EVEN SPARED.
PLEASE IMPLEMENT HUDUD IMMEDIATELY.
AT LEAST I KNOW MY LOVE ONES WILL BE SAFER.
GOD BLESS ABDUL HADI AND NIK AZIZ

Good. Now will the honorable Malaysian parliment please pass a motion to condemn those Hamas terrorists for shooting rockets into Israel and inviting IDF into Gaza?
Roberto

The presence or absence of UK/US envoys would not change the cause of the Gaza conflict. It's not a war to start with. How could this be a war when only one side is firing while the other side is siting duck hoping the bullets stray elsewhere. Its a massacre to be more approriate. The israeli invasion signifies the precursor of the total annihilation of the palestinian population. The arabs and muslims in general should be more realistic. Their only chance of winning is by the divine intervention. But how could this be if the muslims themselves refuse godly inteference. Egypt closes its border with Gaza whilst the arab sheikhs are busy playing golfs and holidaying in gulf. The palestinians deserve to leave in peace and lead an ordinary life. Unfortunately, suffering one after another begets them. Partly this is due to ruckus of their leaders who'd lost the power except batons and sticks. The two states solution as coined by white house and drummed-up by palestinian and arab leaders are nothing but a fake. Everybody knows that no one is sincere. At present the only practical solution is for all palestinian civilians, especially children and women be vacated from both Gaza and West Bank. Let Mahmud Abbas and various palestinian factions including the so called armed combatants deal with the israelis, and if they wish to, among themselves.

Strangely enough, Hamas is ALSO claiming that victory is in sight, and they are about to triumph in their war against Israel.

Anyhow, what use to talk, when BOTH sides refused to accept the UN terms for ceasefire?

WCW, you can see there are very few comments on this topic. Why? Besides the few rhetorical and obligatory noise that Malaysians were expected to make to express their outrage at the violence in the Middle East whether against the Israelis or the Hamas, the real concerns closer to Malaysians' hearts are the local issues. Like the gloomy economic picture. Like the racial and religious polarization created by BN's years of government. Like educational and career opportunities. Like rising crime. Like cost of living. Like environmental degradation. Like traffic jams. Any of these local topics would generate a lotof comments, whether pro or anti establishment.
LOCALPROBLEMA

The only way to stop future genocide is to fight back our way. The cowards use drones and missiles. No suicide bombs. Use snipers and hitmans. Pay them to kill their ambassadors and their families, their company ceos and their families. They kill our children. List down the numbers they have kill and we try to reach that number. An eye to an eye. Hit them anywhere in this world, from Brazil to Mongolia.
Distribute this comment to as many people as possible all over the world.